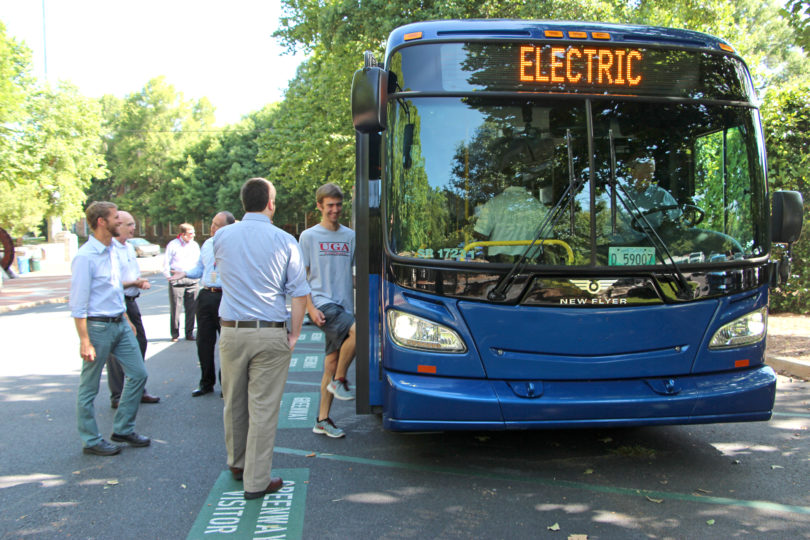 UGA has been awarded $10 million from the state of Georgia to purchase 19 electric buses.

UGA has been awarded $10 million from the state of Georgia to purchase 19 electric buses, and Athens Clarke County received $6 million to buy 10 hybrid-electric buses.

The funding was announced June 22 at a ceremony in the Governor’s Office and was awarded by GO! Transit Capital Program, a competitive funding program administered by Georgia’s State Road and Tollway Authority. UGA will provide $5 million in ­matching funds.

The 40-foot electric buses emit no pollution, are quieter and have lower operating costs than existing diesel powered buses. The buses should arrive on campus in 2017 and are part of the university’s strategic plan to advance campus sustainability.

“We are grateful to Gov. Deal and the Georgia General Assembly for backing this important transportation initiative, and I thank the Go! Transit Capital Program for supporting our proposal,” said UGA President Jere W. Morehead. “This significant investment will put the University of Georgia at the forefront of advancing innovative and cost-effective campus transportation.”

“We tested several electric buses on campus over the past year and found that not only did they perform well, our student drivers and passengers really liked them,” said Robert Holden, associate vice president for Auxiliary Services. “By adding sustainable electric buses to our UGA fleet, we also are helping to raise the air quality in our community.”

UGA’s Campus Transit system serves 11 million passengers a year—including UGA students and Athens community members. Buses in the UGA system, which is the state’s second largest bus system in ridership behind Atlanta’s MARTA system, drive a combined 900,355 miles a year. The new electric buses are expected to use 171,000 fewer gallons of diesel in a year. The battery-powered motors have simpler maintenance and could last for 20 years or more. Over the buses’ lifetime, fuel and maintenance costs are expected to be 84 percent less than those for diesel buses.

“We are excited about bringing this cutting-edge and sustainable electric bus technology to the University of Georgia and the Athens-Clarke County community,” said Don Walter, director of transportation and parking services at UGA. “These buses will enhance research opportunities, greatly reduce emissions and slow the growth of transportation costs. Most importantly, the new buses will improve the quality of transportation for students, faculty and staff. Because they’re quiet and smooth riding, they tend to increase ridership as they’re such a joy to ride.”

The electric buses will provide opportunities for campus research. Scientists and engineers in the UGA College of Engineering are working to develop charging technologies-fast charging and wireless charging for electric vehicles, such as buses. Researchers also are building a database of electric vehicle usage, operation and charge time data to come up with a set of best practices. With the addition of the buses, the researchers will have more data to access.

The electric buses also can be used as batteries to power buildings such as residence halls for up to five hours per bus. This capacity could be useful during snowstorms or other emergencies, Walter said.