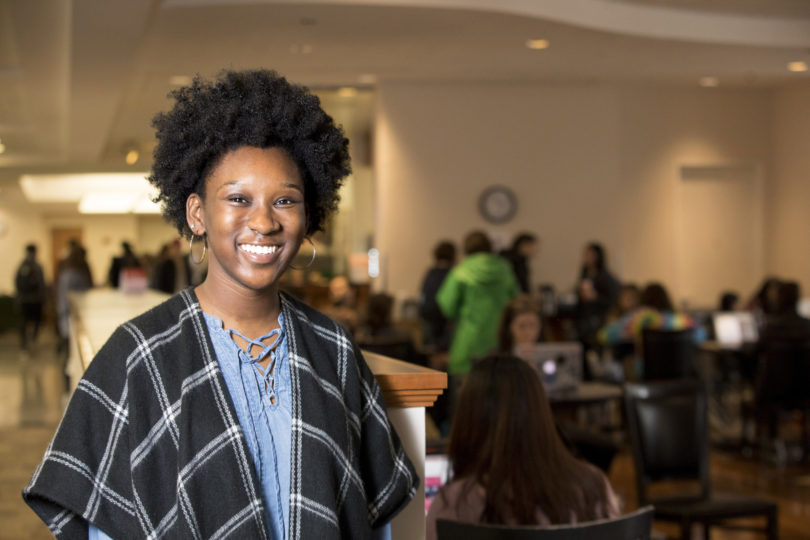 Charlene Marsh is the student recipient of the 2019 President’s Fulfilling the Dream Award. (Photo by Dorothy Kozlowski)

After attending high school in Gwinnett County, Charlene Marsh wanted to go to college out of state.

But her mother, who had co-workers who were UGA alumni, encouraged her to use her last application fee waiver to apply to UGA. After being accepted, Marsh attended a minority admitted student reception, where she learned about the opportunities UGA offered.

That reception with UGA alumni convinced Marsh to enroll at the university. Originally, she came in as an international affairs major because she wanted to be a foreign diplomat or work in foreign service. But as a sophomore, she took an urban policy class that would send her down a different path.

“It completely changed the way I viewed political science and public service,” she said.

The class inspired her to add a political science major and apply to the School of Public and International Affairs’ Master of Public Administration program through the Double Dawgs program.

“The master’s degree program was a perfect intersection between sociology, history and government,” Marsh said. “It was applicable to a lot of topics that we discussed in that urban policy class, such as homelessness, gentrification, sustainable economic development and housing discrimination.”

During her time at UGA, Marsh has worked with numerous organizations on campus and in the Athens community.

“I got involved the minute I stepped on campus,” she said.

She worked with the Student Government Association’s Freshman Forum, which teaches first-year students what service looks like and implements service projects in the community and on campus. She was also a literacy tutor for Alps Road Elementary School. She became part of the National Council of Negro Women. She attended the IGNITE: Social Justice Retreat sponsored by the Multicultural Services and Programs, where she met older students who became role models and mentors. She learned about topics surrounding her identities and the identities of other students and how to be an ally for those communities.

“That experience threw me into this world of getting involved with advocacy and activism,” she said.

This academic year, she serves as the vice president for SGA. Previously, she was the director of diversity and inclusion on SGA’s executive Cabinet.

“My advocacy lies in working through SGA, speaking on behalf of and amplifying the voices of students who don’t necessarily always get a seat at the table,” she said. “If that’s LGBTQ-identifying students or students of lower socioeconomic status who might have to work more hours and can’t get super involved on campus, they can have a voice.”

For her campus and community involvement, Marsh is the student recipient of the 2019 President’s Fulfilling the Dream Award.

“It was an honor to receive the award, especially to be honored with two other black women who have accomplished so much and contributed so much to their communities, and this community specifically,” she said. “To me, it just means continuing the work that others have done. I’ve built on a foundation of understanding and dedication to equity that other people before me have gone through a lot more to start initiating things.”

By stepping out of her own comfort zone, Marsh was able to find a community of individuals who wanted to learn more about the world and who sparked her passion for advocacy and service. That passion helped her decide what she wanted to do with her life.