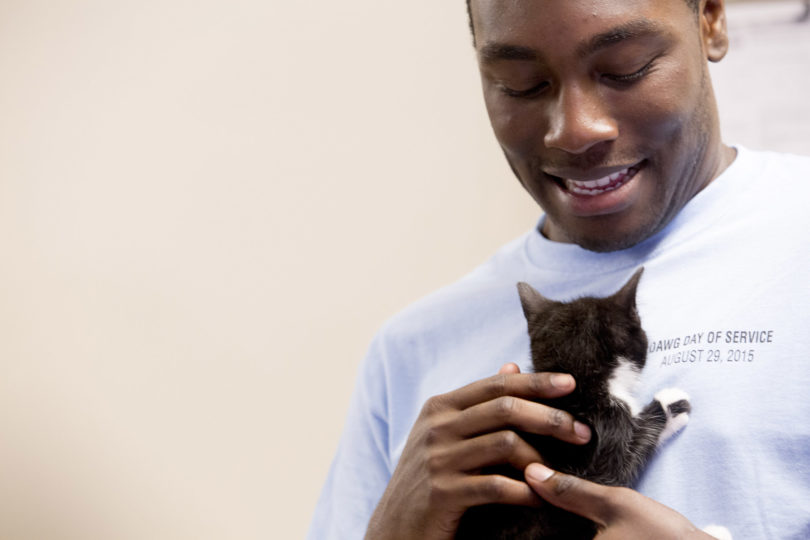 Anthony Gordon holds a kitten while volunteering at the Athens Area Humane Society during Dawg Day of Service.

Twenty-five UGA students crammed into the Athens Area Humane Society to tackle mundane chores—cleaning out sheds and kennels, straightening the pantry and updating landscaping. Their reward would come later in the form of cuddling and socializing with the shelter’s dogs and cats.

After buckling down for a few hours of hard work, they were ready for the licks, purrs and love—plus Instagram photos of adorable animals—that were waiting for them.

The students on this assignment had traveled from the Tate Student Center, their rally point on campus for the fifth annual Dawg Day of Service on Aug. 29. More than 450 students had gathered before dispersing to 21 sites around Athens.

Each student volunteered three hours at various sites for Dawg Day of Service, which began in 2011 as a project of the Center for Leadership and Service in the Division of Student Affairs. Combined, they volunteered 1,365 hours of service this year to help the Athens community. The sites included nonprofits like the Habitat for Humanity ReStore, the Food Bank of Northeast Georgia and Keep Athens Clarke-County Beautiful.

Each site had leaders—upperclassmen who helped organize the students and work with staff. Rahul Shah, a third-year economics and biology major, was one of the site coordinators and had participated in Dawg Day of Service the previous two years.

“I don’t expect us to change things in just one day of service,” he said. “But what we did today is the first step.”

Jed Kaylor, manager of the Athens Area Humane Society, said that community service is mutually beneficial for the shelter and the students.

“Volunteering serves as an education opportunity for kids and high school and college students,” he said. “Having volunteers of different ages, sexes and backgrounds helps socialize the animals and makes them more adoptable. If we didn’t have volunteers, we wouldn’t have much.”

The Athens Area Humane Society is the only permanent Athens intake shelter. It depends heavily on foster homes for its cats and dogs—100-plus currently reside there. The society also provides spay and neutering services, smaller satellite adoption sites and a new mobile surgery bus that does free to low-cost procedures on the weekends.

Perry Siniard, a fourth-year Spanish and international affairs major, also served as a site leader at the shelter.

“Getting involved with Dawg Day of Service was a peer thing,” he said. “My friend group is very service-oriented. I wanted to find something helpful and altruistic and have a way to volunteer.”

He and Shah gathered up the students once their work and animal cuddling was done. For 15 minutes, they, like other students involved in Dawg Day of Service, spent time discussing and reflecting on the work they had done, focusing on the importance of service to a particular organization.

“We don’t just volunteer, we volunteer and reflect,” Shah said. “Before we tackle issues, we have to raise awareness.”