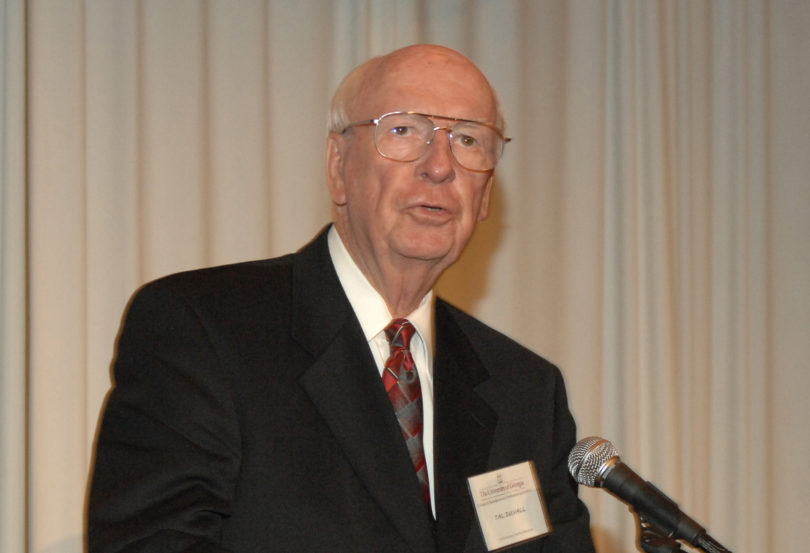 Talmadge “Tal” Clifton DuVall, a celebrated public leader, businessman and military veteran who served more than 30 years in the University of Georgia Cooperative Extension Service, died on Aug. 21 after a brief illness. He was 84.

His memorial service will be held on Sept. 3 at 2 p.m. at the First Methodist Church in Athens. A family visitation will be at the church in the Wesley Parlor following the memorial service.

Born in Greensboro, Georgia, in 1933, DuVall grew up working on his family’s dairy farm. He attended the University of Georgia, where he received three degrees: a bachelor’s degree in dairy science, a master’s degree in extension education and a doctorate in public administration.

After serving in the U.S. Army in Panama, DuVall returned to Georgia and began his extension career in 1956 as an assistant county agent for Carroll County. The following year he was promoted to county agent, and he was appointed county agent for Clarke County in 1965.

He went on to serve as district agent for Northeast Georgia in 1967 and Northwest Georgia in 1969. He was named assistant director of extension in 1972. Capping his career, DuVall was appointed director of the Georgia Extension Service in 1977, the position he held until his retirement in 1988.

“He was the director of extension when I was a 4-H’er and later when I was a student at UGA,” said Laura Perry Johnson, associate dean for UGA Extension. “Tal DuVall was larger than life. He was a visionary man that was very progressive and ahead of his time in many of his ideas. He was very interested in the prosperity of rural Georgia and was one of the first people to begin talking about the two Georgias. He had a tremendous impact on UGA Extension, the College of Agricultural and Environmental Sciences and the state of Georgia.”

Among many other accomplishments during his extension career, DuVall led efforts to establish the Jekyll Island 4-H Center and the renovation of the Rock Eagle 4-H Center. He was responsible for the publication of the “Georgia County Guide,” a book filled with detailed information about agriculture, geography, education, crime and other vital statistics that has proven invaluable for elected officials, policymakers, researchers and extension agents.

“Tal was bigger than life and lived life to its fullest,” said Bo Ryles, retired 4-H leader and director. “Tal inspired me. He motivated me. He helped us see what we could be. That’s what he did everyday for all those around him. He was a visionary leader that changed our world.”

As extension director, DuVall supervised the Integrated Pest Management Program of Georgia, which became the national model for reducing agricultural pesticide costs while providing a database resource for agricultural research.

His many awards include being chosen to be a member of the United States Agricultural Education Delegation to People’s Republic of China in 1980; being the Georgia Adult Educator of the Year in 1980; Distinguished Service Award, National Association of 4-H Agents in 1987; Man of the Year in Georgia Agriculture by Progressive Farmer in 1988; Athens Regional Medical Center J.W. Fanning Humanitarian Award; and being inducted into the Georgia Agriculture Hall of Fame in 2010.

He was scheduled to be recognized as a recipient of the 2017 Graduate School Alumni of Distinction Award on Oct. 19.