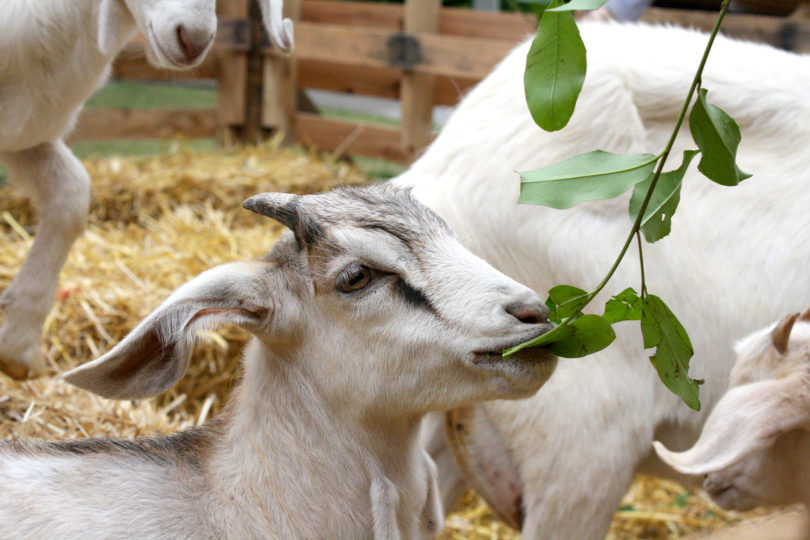 The Tanyard Creek Chew Crew goat herd will continue its foraging work on campus this spring, and a “Welcome Baaa-ck Chew Crew” event will be held March 25 at 5:30 p.m. at the goat pen next to the Hull Street parking deck.

The welcome celebration will feature the arrival of Junior, Sylvester, Wickett, Goatis Redding and the other Chew Crew goats, along with treats (for both humans and goats) provided by Earth Fare. The event will be one of several opportunities for the UGA community to learn about urban water quality, invasive plants and prescribed grazing while interacting with the crew this spring.

During March and April, the goats will help restore the ecological quality of the creek by munching away at the kudzu, English ivy, privet and other invasive plants that cover the stream banks on Tanyard Creek, a stream that flows through campus.

In preparation for the herd’s return, a two-day “Botany Blitz” was held March 22-23 to inventory the plant species and monitor water quality at the Tanyard Creek prescribed grazing site.

Volunteer workdays at Tanyard Creek are March 31, April 8, April 16 and April 24 from 4-6 p.m.. Work will begin near the goat pen. Volunteers can help the crew by picking up garbage, sowing native plant seeds to help stabilize the soil and cutting invasive vegetation that is too tall for the goats to reach on their own.

On April 5, the Chew Crew also will make an appearance at Plantapalooza!, a celebration and sale of native and ­traditional plants sponsored by the State Botanical Garden, along with the UGA Horticulture Club and the UGA Trial Gardens.

From 6-9 p.m., the crew will appear at the “Invasive Species Hog Roast and Art Show,” a fundraiser and educational event sponsored by student members of the Society for Conservation Biology at Flinchum’s Phoenix, 650 Phoenix Road. Tickets may be purchased at the door or in advance at www.uga.edu/scb.

On April 22, at a time to be announced, the Chew Crew will attend the Earth Day celebration at the Tate Student Center.

The Chew Crew is part of an experiment in prescribed grazing, a technique that uses livestock to remove invasive, non-native plants from forests and stream banks. The project began in 2012 with a proposal by College of Environment and Design student Zach Richardson, which was funded by a grant from the UGA Office of Sustainability.

Since then, the crew and its human helpers have been deployed along the creek for two four- to six-week grazing periods per year-once during the spring, and again during the fall.

Erin Lipp, an associate professor in environmental health sciences, and Keri Lydon, a graduate student in the College of Public Health, are coordinating water quality research at the Tanyard Creek site this semester.