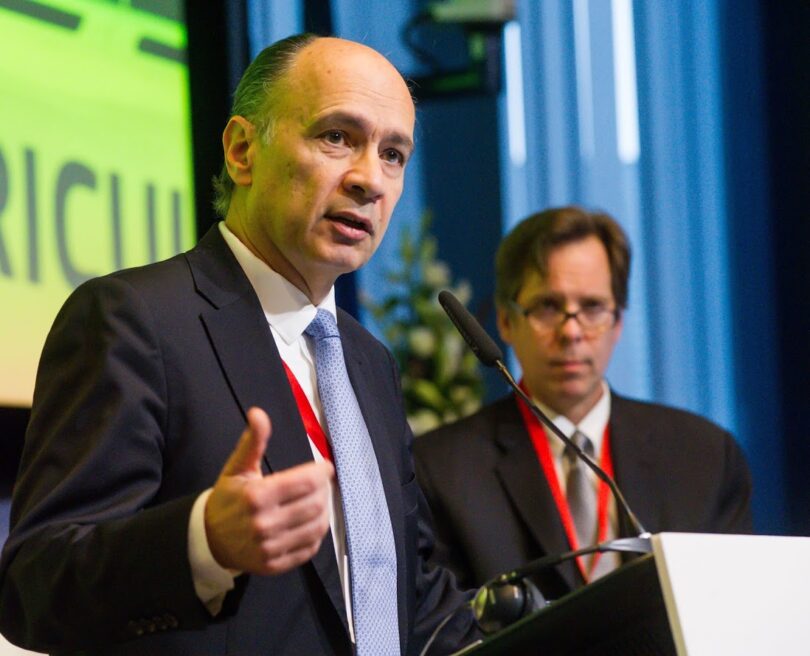 Tassos Haniotis is the director for strategy, simplification, and policy analysis in the Agriculture and Rural Development of the European Commission

When Tassos Haniotis MS ’84, PhD ’87 arrived on UGA’s campus, everyone joked that he simply replaced one Athens for another. A native of Greece, Haniotis attended college in the original Athens, earning a bachelor’s degree in economics. His sights were already set on the U.S. for graduate school, and a graduate research assistant position at UGA sealed his decision to come to Georgia.

“I wouldn’t have been able to come to the U.S. without the financial means to complete my studies,” he says. “I don’t regret a single moment. Attending UGA was the best part of my life.”

Haniotis wanted to continue studying economics. He focused on agricultural economics at UGA as a way to serve his country and the rest of Europe. “I already knew I wanted to work for the European Commission and work in a policy area that was very important to Greece,” Haniotis says.

Haniotis relies on both his theoretical understanding of agricultural economics from his UGA graduate studies and his practical experience from his time in the commission to address the day-to-day challenges. One of the biggest of those is dealing with the economic and environmental impact of climate on farming. Having effective communication strategies for all parties involved in these global questions is important too.

“I’m a city boy, so I entered the agricultural area from the outside,” he says. “My feeling is that this gives me a potential advantage of seeing the problems the farmers face while also seeing from the side of the consumer.”

For his job, Haniotis has traveled the globe—about 50 countries and 22 states, in all—to connect with other policymakers and to visit farmers. Much of Europe is farmland, Haniotis says. That’s a lot of ground to cover, but it has provided him with invaluable perspectives in the often-heated discussions of agricultural policy.

“What I see has broadened how I understand the challenges we face. You need to understand the starting point of others before you search for common ground,” Haniotis says. “There’s a natural tendency to put much more focus on what divides people and miss the big picture of what we have in common. I could make jokes about American football or basketball, or talk about the Georgia Bulldogs. These might be the areas that we disagree, but at least amongst ourselves, we can find something to talk about.”