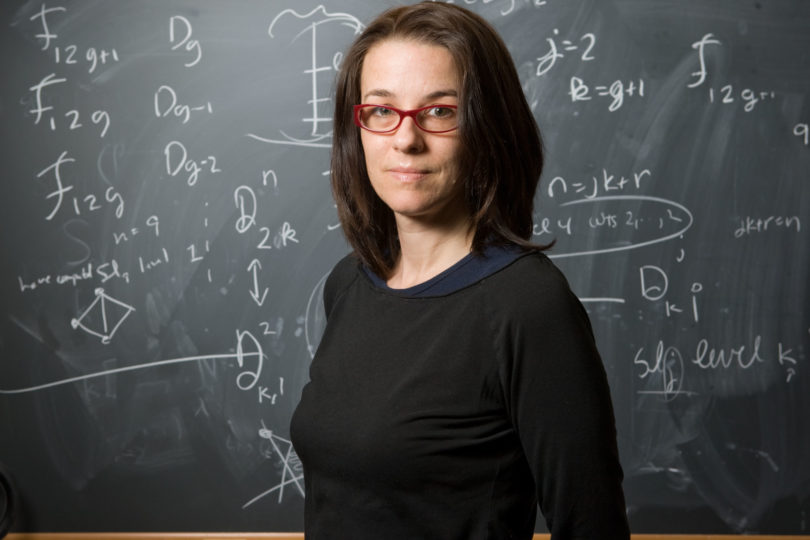 Can mathematics be beautiful? If you need proof, look no farther than Angela Gibney’s eyes. When this assistant professor in the Franklin College’s math department talks about algebraic geometry, there’s a sparkle—an entrance, if you will—into the gorgeous logic of numbers.When prodded to talk about herself, Gibney is glad to, but one is struck by the obvious fact that she’d rather be on a date with her research—possibly scribbling ideas toward a proof while in a doctor’s waiting room with one of her daughters.

“I tell people that in the same way that running trains the body, learning to reason trains the mind,” says Gibney, who came to UGA in 2009. “And training the mind trains you for life and prepares you for any job. Every day I come to work, I just love what I do.”

Mathematics is a family affair for Gibney at UGA, since her husband, Daniel Krashen, also is an assistant professor in math with an interest in algebraic geometry.

When Gibney was growing up in Eureka, Calif., her mother was a high school math teacher, and from earliest memory, Gibney spent her time in love with numbers—understanding that they can be practical and beautiful at the same time.

She knew that the same numbers that protect national security through codes can be part of a proof that, to those who can read it, is pure poetry. (Her father taught English and history, so being in the classroom was completely natural to her.)

Her family moved to San Diego when she was 10, and while there she began a lifelong love of classroom mathematics.

“I guess I’m sort of an engineer by nature,” she said, “since I love solving problems.”

While an undergraduate at the University of California at Santa Barbara she participated in a program called Budapest Semesters in Mathematics and also took a masterclass in algebraic geometry in the Netherlands.

“It was interesting to me that even abroad we were all learning in the same language—math,” she said.

She entered graduate school at the University of Texas in Austin and managed to finish a rigorous program in only four years, finding out that she also had a real knack for teaching. After graduating in 2000, she left for a position at the University of Michigan and started dating her future husband. UGA lured them here last year.

If women remain a minority in the field of mathematics, Krashen is in an even smaller slice of that academic pie, being African American. Yet Gibney and Krashen are likely the new face of mathematics, as the field and its manifold areas of study are opening to an eager new professorial class.

Someone—a writer perhaps—listening to Gibney rapturously talk about toric varieties and conformal blocks might only slowly understand the world in which she lives. But there’s no mistaking the delight that informs it. To her a life in numbers adds up perfectly.

With daughters Jordan, 4, and Lexie, 1, always happily on their minds, she and Krashen have little spare time, though Gibney is a dedicated runner who tries to get in her 35 miles every week. Spare time, though, is not something that interests her much.

“I have to admit I’m a workaholic,” she said. “I’m always thinking of problems, always doing calculations and trying to see and understand new patterns. In math, you take your lab with you. All you need to do your experiments is a notebook.”