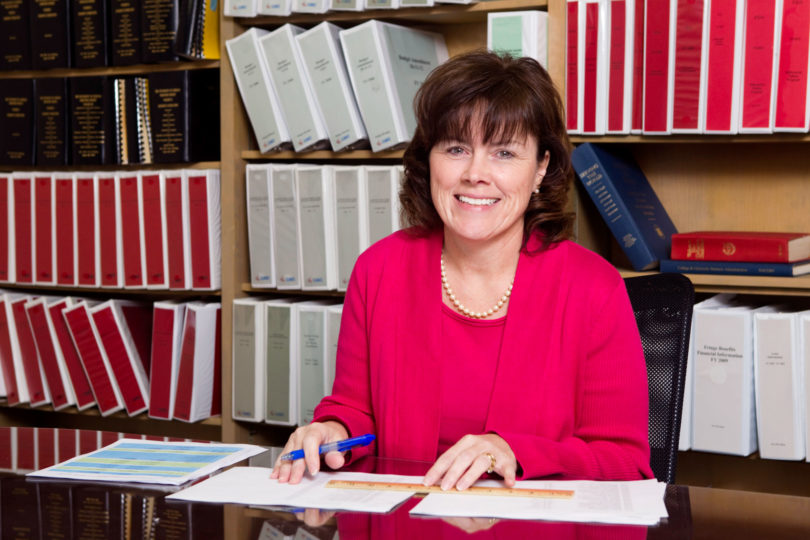 As the workday winds down on Wednesday afternoons, others working in the University Budget Office know to stay out of the way of assistant director Vonnie Swain as she “runs out the door” to make it to a Zumba dance class on time.

“I love Zumba, and I go over at the Botanical Garden,” she said. “It’s a fun class, and I meet new friends there all the time. And since we do it in the atrium there, it’s just like working out in the open.”

Swain started going to the exercise class three years ago along with a co-worker in the budget division.

“I’m so glad she introduced me to that; it’s something I never would have tried on my own,” Swain said. “And it’s really great after a stressful day.”

And after more than two decades in the University Budget Office with responsibilities dealing with the development, oversight and reporting of the university’s $1 billion budget, it’s easy to see why Swain might have some excess stress.

Swain started at UGA in 1987 and moved to the budget office a year later.

“People usually don’t leave the University Budget Office,” Swain said. “I really think it’s a wonderful office to work for. I may not get to meet face to face with a lot of people, but I get to talk to a lot of people, and there’s always someone needing help with their budget.”

After becoming assistant director in July, Swain now works on preparing budget reports and analysis for the senior administration and the board of regents.

“We have to do quarterly reporting to the board of regents,” Swain said, “but we actually balance the budget every month.”

Swain also works on annual expenditure reports and any other financial information the board of regents requests from the university.

One of Swain’s biggest roles is managing the Campaign for Charities, the annual fundraising program through which faculty and staff donate to nonprofit organizations and agencies.

“It’s really rewarding doing Campaign for Charities,” Swain said, adding that she likes helping connect campus members with organizations. “I’m a people pleaser, so I like it.”

Swain organizes the group that compiles information about the campaign for employees. She also works to make sure agencies receiving donations are validated, and all donations and cash collected are accounted for.

Outside of work, Swain is helping raise a family full of testosterone and furry friends. Along with three sons and Mark, her husband of 24 years, Swain’s “funny farm” (as she calls it) has six dogs, four cats and some chickens.

The family has raised pigs, turkeys, rabbits, goats and even a ball python over the years. Some of the animals have come from owners who gave them away and others have joined the family after Swain’s sons brought them home.

“We all love animals, so we just kind of collect whatever needs a home,” Swain said. “We’re always training something at my house.”