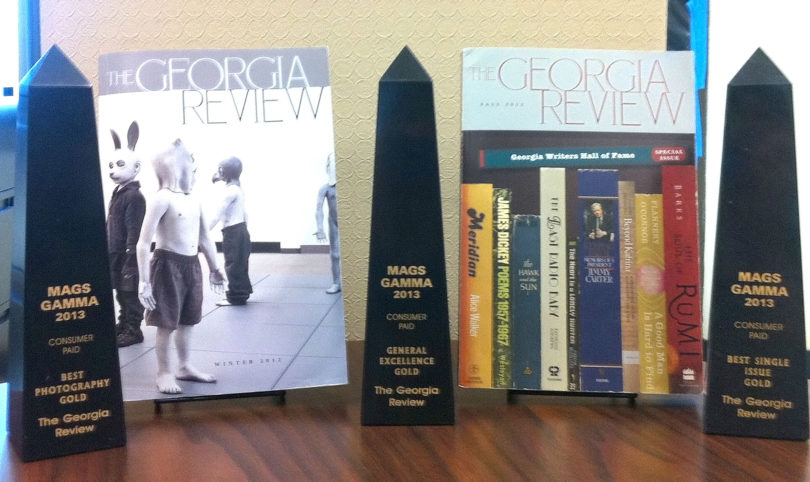 The Georgia Review recieved 11 citations in the Magazine Association of the Southeast's 24th annual GAMMA Awards competition. The prizes were given out at a luncheon during the association's annual conference held Sept. 20 in Atlanta.

Athens, Ga. – The University of Georgia’s Georgia Review, regularly acclaimed as one of the top handful of literary magazines in the country, took six gold awards-including one for general excellence-and five other honors in the Magazine Association of the Southeast’s 24th annual GAMMA Awards competition. The prizes were given out at a luncheon during the association’s annual conference Sept. 20 in Atlanta.

The half-dozen gold awards is a record for The Georgia Review.

The five other gold awards were for:
• Best single issue: The fall 2012 focus on writing by and about members of the Georgia Writers Hall of Fame.
• Best photography: Kael Alford’s “Bottom of da Boot: Losing the Coast of Louisiana (spring 2012).
• Best feature: Kael Alford’s same photography portfolio, in combination with an introduction by then-managing editor of the Review Mindy Wilson and an essay by Alford.
• Best series: Two essays on the 31-year aftermath of the Mount St. Helens eruption, “Voice in the Whirlwind” by William Johnson and “Isogloss: Language and Legacy on Mount St. Helens” by Elizabeth Dodd (spring 2012).
• Best essay: “Reliquaries” by past UGA Press director Paul Zimmer (winter 2012).

Zimmer’s piece was part of a category sweep that included the silver award for best essay for Nancy Geyer’s “Black Plank” (spring 2013), the bronze award for Scott Russell Sanders’ “The Way of Imagination,” and the honorable mention to Marianne Boruch’s “O’Connor Plus Bishop Plus Closely Plus Distance” (fall 2012).

The Review’s other silver award was for best series, given to two poetry essay-reviews by Judith Kitchen, “A Question Takes” (summer 2012) and “With a Little Help from My Friends” (winter 2012). The Review also received an honorable mention for design (spring 2012 and fall 2012).

“The Review has won the National Magazine Award for both fiction and essays, and we have one of the most consistent records for having our issues’ contents reprinted in such anthologies as Best American Poetry and the Pushcart Prize: Best of the Small Presses,” said Georgia Review editor Stephen Corey, now in his 31st year with the journal. “However, two factors make these GAMMA Awards especially satisfying and important to us: We earned them while being judged against many kinds of magazines, and we earned them for many different aspects of our endeavor. We hope that anyone hearing about these honors will take note that The Georgia Review is a magazine of high quality that should in truth be of interest and value to a broad range of readers.”

For further information about The Georgia Review, see www.thegeorgiareview.com or call 706-542-3481.