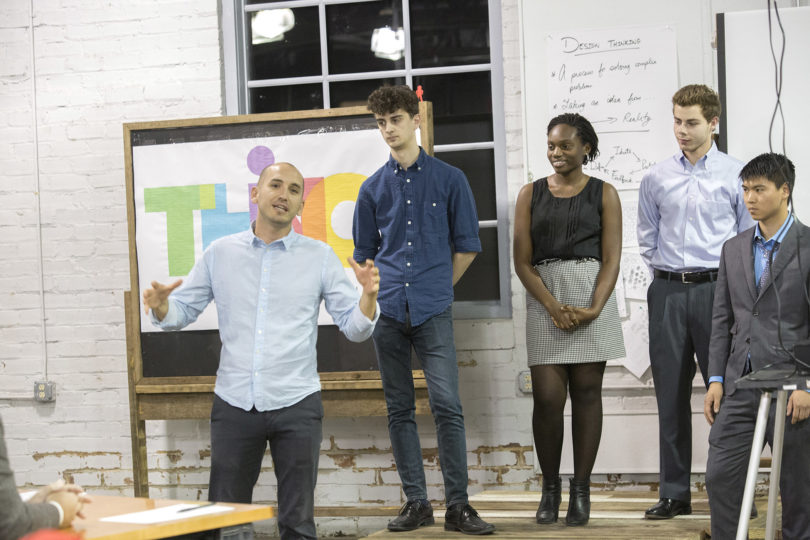 The Thinc. initiative began in 2013 as a weeklong event to showcase student innovation and entrepreneurship at UGA. As the initiative encouraged faculty, staff and students to collaborate on groundbreaking ideas, a new idea for the university emerged: What if there was year-round, campuswide programming aimed to be a catalyst for innovation at UGA?

That idea helped to expand Thinc., which is housed in the Office of the Vice President for Research, into a new phase with a modified mission.

“My focus is on continuing to organize the people of the university around creating a culture of innovation and making resources available to students who want to pursue novel ideas and solve big problems,” said Jared Bybee, who was named director of the Thinc. program last year.

Bybee, who has served UGA in a number of faculty roles since 2013, has steered the program toward offering extracurricular, noncredit activities such as pop-up classes that teach skills like 3-D printing and coding for noncomputer science students. These are the kinds of skills that allow students to create the kinds of big ideas they discover in the classroom.

During his time at UGA, Bybee—a lawyer by training—has taught classes at the School of Law, Terry College and the College of Family and Consumer Sciences. He also worked at the J.W. Fanning Institute for Leadership Development as a public service assistant.

The opportunity to work on both North and South Campus allowed Bybee to experience the breadth of resources at UGA, which guides his effort to make Thinc. an interdisciplinary initiative.

“One of the measures of success,” Bybee said, “is that we have students from all over the place from the business school and engineering, computer science, art, environmental design. Innovative entrepreneurship happens when you get that real mix of students who have different skill sets and viewpoints on the world.”

One student who has found inspiration with Thinc. is Shep Ogden, a second-year finance major and computer science minor. Ogden credits Thinc. for helping him develop new modes of thinking.

“Thinc. is an umbrella for different students in the arts, business and science,” he said. “I’m getting to work with a group of people who think in different ways, which broadens my way of seeing things.”

One problem-solving tool Bybee has focused on teaching is the design-thinking process, which considers empathy when creating solutions.

The goal is to design “something that’s not just functional but functions in a way people need and want to use it,” he said.

Thinc. has hosted classes and workshops on design thinking, including a recent 24-hour contest that used design thinking to address challenges of sustainability at UGA’s campus.

Bybee also is developing a design-thinking workshop that can be taken to traditional UGA classrooms. He encourages faculty members to contact him (bybeej@uga.edu) if they think such a workshop would be beneficial in their courses.

Ultimately, Bybee hopes that Thinc. will be one way UGA can make an impact on Georgia and beyond.

“We have super-sharp students and dedicated professors,” he said. “We can steer students to think about those grand challenges of the world right from UGA.”