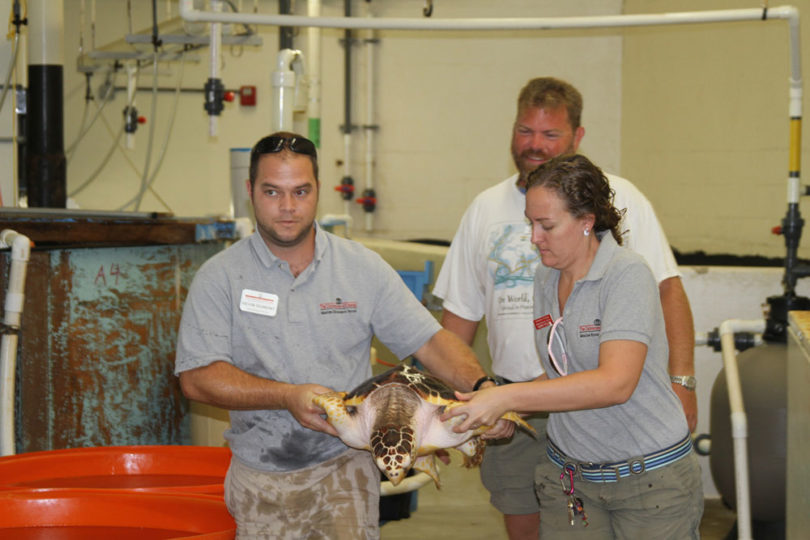 UGA Marine Extension agents transport Eddie from the aquarium where he lived for three years.

Skidaway Island, Ga. – A three-year-old loggerhead sea turtle nicknamed Eddie was released into the ocean on the morning of Friday, Sept. 2 after living at the University of Georgia Marine Education Center and Aquarium (MECA) on Skidaway Island since it was a hatchling. After being tagged, Eddie crawled across the sands of Wassaw Island National Wildlife Refuge and headed into the surf with no signs of stress before disappearing into the waves, said Karin Paquin, assistant curator at MECA.

“The release was bittersweet, but Eddie was a success story,” said Paquin, who noted that loggerhead sea turtles are on the threatened species list at the state and federal level. Eddie arrived at the aquarium as a hatchling weighing less than one ounce in September 2008 after being determined to be a “straggler.” A straggler is a hatchling that does not make it out of the nest. As a hatchling, Eddie had a fungal infection that made his shell soft, but at the time of the release was completely healed.

“Since the 1980’s, MECA has housed loggerhead sea turtles at the aquarium to help enhance public programs centered around sea turtle nesting, conservation efforts, threats and habitats along the Georgia coast,” said Paquin. “In his three-year residence, Eddie helped to promote sea turtle conservation to more than 25,000 students and 30,000 public visitors.”

A newly hatched loggerhead sea turtle, also a straggler, recently arrived at the aquarium to replace Eddie. The hatchling, which will be named in the coming weeks, was obtained through collaboration with the Georgia Department of Natural Resources and the U.S. Fish and Wildlife Service. A special permit from the DNR allows the aquarium to house and care for this threatened species of sea turtle, along with other species of marine organisms on display.

“The hatchling will serve as an ambassador for the conservation of loggerhead turtles,” said Paquin. “Caring for a loggerhead sea turtle allows the UGA Marine Extension Service to create educational activities for students and the public that emphasize the importance of conserving not just the animal itself, but also the animal’s environment and food sources.”

The tiny hatchling will live in a tank behind the scenes until it is eating regularly and large enough to be put on display. The sea turtle will eventually live in a 1,600-gallon tank with fish, corals and rocks.

“We hope that like previous ambassadors to loggerhead sea turtle conservation, this new hatchling will be strong, healthy and ready for release in three to four years,” said Paquin. “At that time, a new hatchling will come to live at MECA.” If a veterinarian deems a turtle not releasable, the aquarium staff works with larger aquariums to find a new home for the sea turtle.

Loggerhead sea turtles are the most common sea turtle species to nest regularly along the Georgia coast and barrier islands. Female loggerhead turtles crawl up beaches between May and October to lay their eggs in nest chambers dug in the sand with their back flippers before returning to the sea. The eggs incubate for approximately two months before the hatchlings emerge and head to the water, where they can live as long as 70 years and grow to more than 200 pounds. Eddie is still considered a juvenile sea turtle and will not reach maturity until between 10 and 35 years old.

MECA has been collaborating with the DNR and the Caretta Research Project for many years to bring “straggler” loggerhead sea turtle hatchlings to the facility to promote conservation of the species.

MECA is the education branch of the UGA Marine Extension Service (MAREX), which works to increase public awareness and understanding of coastal ecosystems, increase the efficiency of existing marine industries and identify new industries that do not harm the environment.