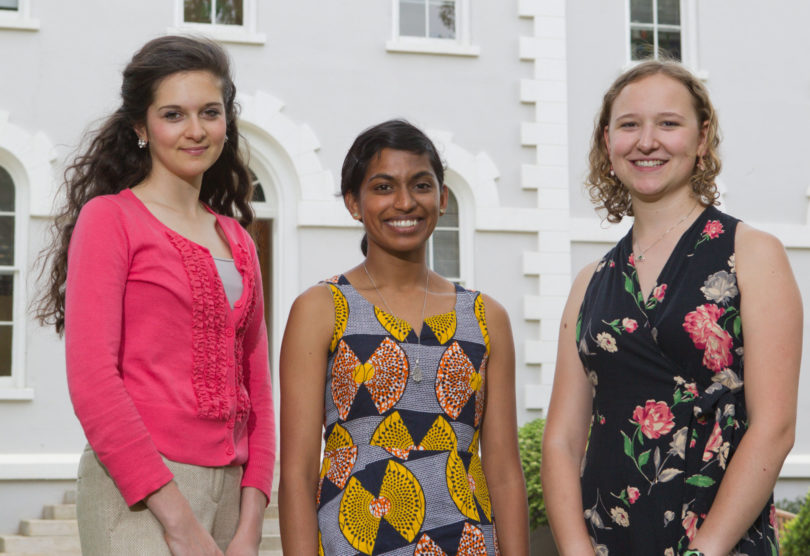 Juniors Ian Karra of Roswell and Rosemary Gay of Douglasville each received honorable mentions in the national scholarship competition. Karra is pursuing bachelor’s degrees in economics and Spanish, and Gay is pursuing a bachelor’s degree in agroecology and sustainable development (Honors interdisciplinary studies).

“Once again, UGA students have proven that they are competitive with the best students at any American institution,” said UGA President Michael F. Adams. “The Udall Scholarship recognizes potential in one of the most critical areas facing our world in the 21st century, and I am proud that UGA students are being recognized for their good work and commitment to environmental issues.”

The Morris K. Udall and Stephen L. Udall Foundation administers the scholarship program, which was established by Congress in 1992 to honor U.S. Rep. Morris Udall’s 30 years of service. In 2009, his older brother, Stewart, was included in the foundation recognition for his service as U.S. Secretary of the Interior.

“The Udall Foundation identifies future leaders to help preserve and protect our national and natural heritage,” said David S. Williams, associate provost and director of UGA’s Honors Program. “I am very proud of Heather, Malavika and Theresa, who are very worthy of being named Udall Scholars. I am also pleased that Ian and Rosemary received honorable mentions, because they too are very deserving of recognition. All of these students are inspiring, and I expect great things from them in the future.”

Hatzenbuhler has taken advantage of her academic experiences at UGA to help prepare her for a public service career in environmental justice. Last fall, a public policy proposal she wrote addressing clean energy improvements, especially for residential homes, led to her current involvement with the Athens Department of Housing and Economic Development to implement her recommendations.

Hatzenbuhler has participated in the Honors Internship Program in Washington, D.C., working for the TV to Africa division of Voice of America, a multimedia international public broadcasting company. She founded the Sierra Student Coalition at UGA and has led the UGA Beyond Coal campaign, which advocates the use of alternative energy sources by institutions of higher education. She also is the co-chair of the Go-Green Alliance, a coalition of campus environmental groups.

With career aspirations in disease ecology, particularly the intersection between human and wildlife populations, Rajeev has participated in research endeavors in UGA’s Odum School of Ecology and UGA’s College of Veterinary Medicine. She traveled to Kenya last summer through the National Science Foundation Research Experiences for Undergraduates program.

On campus, Rajeev serves as co-president of the Ecology Club and co-president of the UGArden, a student-run community garden promoting the benefits of sustainable gardening. She also is involved with Real Food UGA, a student group that supports local food purchasing for campus dining halls.

Stratmann, who was also recently named a 2012 Goldwater Scholar, currently is working on two conservation biology projects integrating mathematics and fieldwork. One project is a faculty-guided inquiry on understanding the process of extinction and the other is her own inquiry to help conserve the federally threatened bog turtle.

Through UGA’s Herpetological Society, Stratmann has coordinated educational events about amphibians and reptiles. She plans to enroll in a Spanish language program in Argentina this fall so that she can reach broader audiences for her conservation work in Georgia. After graduation, Stratmann would like to pursue a Ph.D. in conservation biology with emphasis in mathematical biology and herpetology.

Gay currently is studying at Universidade Federal de Viçosa in Brazil as a recipient of a 2011 National Security Program David L. Boren Undergraduate Scholarship for international language study. Through this research study abroad experience and past trips to Costa Rica and Brazil, she is laying the groundwork for a career in sustainable agricultural development in Latin America.

Under the guidance of James Porter, Meigs Professor of Ecology at UGA, Karra has participated in ecosystem-focused projects that have taken him to Costa Rica and the Florida Keys. He also served as a lead trainer for the 2011 PowerShift Conference in Washington, D.C., the largest youth environmental conference in the world. Karra would like to become an environmental economist.