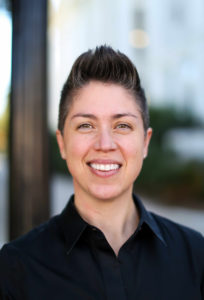 The Hugh Hodgson School of Music will present a Thursday Scholarship Series concert on Jan. 30 at 7:30 p.m. in Hodgson Hall, featuring a program titled “Common Hour” by Jaclyn Hartenberger, associate director of bands.

The program was inspired by her conducting classes. The variety of music and collection of performers from across the music building makes the concert so unique, according to Hartenberger.

“I chose works that would be fun for the audience to hear in a new way and built the first half of the concert to feature these familiar pieces with a twist,” she said. “My hope is to provide a new listening experience for the audience”

The first half of the concert will feature works by Mozart, Debussy and Tchaikovsky. Adrian Childs, professor and associate director of research and graduate studies, created an adaptation of Mozart’s “Eine Kleine Nachtmusik” for chamber strings with Harmonie ensemble (two oboes, two clarinets, two horns and two bassoons), combining elements of the “orchestra” and “band” heard in Mozart’s time. The Debussy piece is a chamber version created by Schoenberg including piano and harmonium, a small version of an organ. Finishing out the first half is a wind ensemble transcription by Peter van Zandt Lane, assistant professor, of the Tchaikovsky violin concerto featuring Shakhida Azimkhodjaeva on solo violin.

“Ensemble music is like a mosaic work of art” said Hartenberger. “ You have the individual musicians working together to breathe life to a singular work. Individually, these musicians are uniquely masterful performers and the collective can be awe inspiring, just like a mosaic.”

The Adams piece serves as another version of this piece of art, a soundscape passing of phrases through which audiences witness the individual tiles.

“By the end of the piece, you are finally able to experience the full spectrum of the mosaic soundscape,” said Hartenberger.

The UGA Hugh Hodgson School of Music sponsors more than 350 performances every year and continues the legacy started by its namesake, Hugh Leslie Hodgson. The Thursday Scholarship Series began in 1980 and continues the tradition of music appreciation programs Hodgson started. Proceeds from these concerts are the primary source of funds for School of Music general student scholarships.

Tickets for the event are $20 for adults and $3 for students and children and can be purchased online at pac.uga.edu.

For more information, visit music.uga.edu. For up-to-date concert announcements and other events at the School of Music, subscribe to the weekly email list. Those unable to make it to the concert can watch the live stream at music.uga.edu/live-streaming.