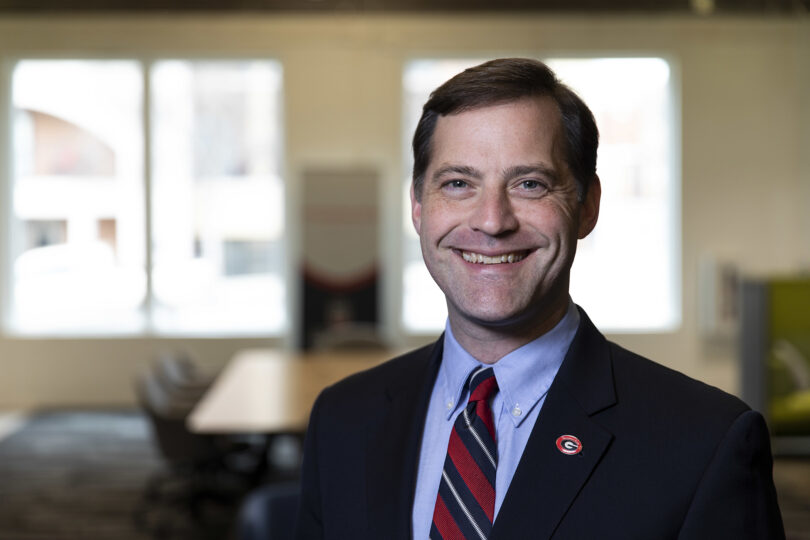 After seven years at the University of Georgia, Vice President for Government Relations Tobin (Toby) R. Carr will conclude his service on April 30 to join his wife to advance a government affairs and strategy firm she founded several years ago, embarking upon an entrepreneurial goal he’s had since entering the government sector.

Carr was named as UGA’s vice president in 2019, after serving four years as associate vice president for government relations and director of state relations. Prior to joining the university, Carr served as director of planning for the Georgia Department of Transportation. He also worked on the staff of former Gov. Nathan Deal in several roles and was an aide to House Majority Whip Jan Jones, who now serves as Speaker Pro Tem. He is an Honors graduate of UGA, holding dual degrees in finance and agricultural engineering.

In making his announcement, Carr offered thanks to President Jere W. Morehead, his mentor since his time as a UGA Honors student, for the opportunity to serve in two critical government relations roles.

“President Morehead’s vision, service and leadership have been transformational for UGA, and no one has had a more singular focus on making UGA the best university in the nation. He is an extraordinary president in no small part by always maintaining the heart of a teacher,” Carr said. “I also extend my sincere thanks and appreciation to Governor Kemp, the Board of Regents, the University System of Georgia, the Georgia General Assembly and their staffs for their dedicated support of the university’s mission.”

Morehead offered his own thanks and appreciation for Carr’s service, stating: “I have known Toby Carr since he was a first-year Honors student at UGA, and I have watched him grow and thrive after graduation in a variety of roles in this state, culminating in his service to UGA as a vice president. He is a highly respected figure on this campus and around Georgia. His wise counsel and thoughtful leadership will be missed in my administration.”

Over the last several years, the Office of Government Relations has contributed significantly to UGA’s success in generating public support to help the institution continue to provide a world-class education, grow the research enterprise and serve the state of Georgia.

“I am grateful to have served my alma mater alongside many extraordinary colleagues across the faculty and administration,” Carr said, “especially the hardworking professional team in the Office of Government Relations.”

Morehead announced that Griff Doyle, who preceded Carr as the vice president for government relations before his retirement, will return to campus to provide interim leadership for the office.

“Griff Doyle acquired a wealth of knowledge leading our government relations efforts for many years,” Morehead said. “Moreover, his prior leadership experience in other state of Georgia and UGA offices will serve us well in this interim period. I appreciate his willingness to give back, once again, to his alma mater.”

A campus search committee will be formed later in the fall to begin the search for UGA’s next vice president for government relations.