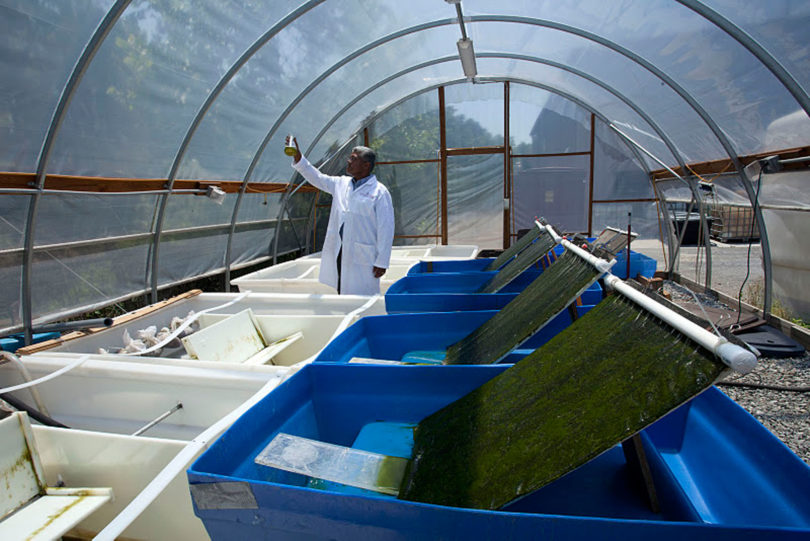 A $4 million Department of Defense-funded collaboration between the University of Georgia and University of Puerto Rico taps UGA expertise in growing algae for biofuels. The partnership will create a renewable energy center that addresses the energy-independence needs of the Caribbean territory. Pictured is K.C. Das

Taking advantage of a marine location and tropical climate that are ideal for growing algae, researchers from the University of Georgia and the University of Puerto Rico are creating a renewable energy center to grow algae-based biofuels.

Algae is considered one of the most promising sources of renewable fuels because it grows rapidly, it can be grown in a variety of aquatic environments, including wastewater and salt water, and it does not compete with food agriculture for resources. Researchers around the globe are working to find ways to cost effectively grow and harvest the aquatic microorganisms, and convert the algal biomass to fuels.

Funded by a $4 million grant from the U.S. Department of Defense, the renewable energy center in Rio Piedras, San Juan, Puerto Rico will help address the energy needs of the Caribbean territory and help the U.S. reduce use of fossil fuels. UGA will receive $1.2 million, and the UPR will receive $2.8 million.

“The project is an exchange of knowledge and expertise,” said K.C. Das, UGA professor of biological and agricultural engineering, who is co-principal investigator on the project and the center’s co-director. In addition to Das, UGA collaborators include UGA engineering outreach faculty Ryan Adolphson and Daniel Geller, and postdoctoral research associates Manjinder Singh and Umakanta Jena.

“As an island completely dependent on imported energy, Puerto Rico and its entire industrial base is keenly interested in a renewable domestically produced energy source,” said Adolphson. “This center will develop and demonstrate technologies to begin meeting that need.”

Das said that the project melds UGA research strengths in thermochemical conversion of algae with UPR research strengths in anaerobic digestion of algae. Thermochemical conversion uses heat to convert biomass into gas and bio-oils. Anaerobic digestion uses microbes to convert biomass into biogases, such as methane.

In Athens, where UGA operates a state-of-the-art algae research facility, researchers will focus their efforts on production of different strains of microalgae grown in wastewater. In Rio Piedras, the researchers will identify local strains of marine macro-algae-kelp-like seaweeds-that can produce maximum yields of biogas.

Researchers at the Rio Piedras facility also will culture algae and develop pilot-scale facilities that produce biogas and liquid transportation fuels-biodiesel , bioethanol and biocrude-from algae. The project will use facilities of industrial partner Biolípidos de Puerto Rico for biodiesel production.

With a goal of establishing a biofuels industry in Puerto Rico, UPR and UGA researchers will study the economic viability of an algae-based biofuels industry, assist UPR in identifying local industrial partners and develop a future workforce.

“This new center is designed to connect the basic research at the university level with the practical and applied needs of industry and will serve as a gateway for students to find successful careers in this new and rapidly growing industry,” said Adolphson. UGA and UPR graduate and undergraduate students will participate in the research at both locations.

The researchers also will investigate how they can recycle the waste materials produced by both the anaerobic and thermochemical conversion processes as high-nutrient fertilizers.

Note to editors: An image of K.C. Das in the state-of-the-art algae research facility at UGA is available for download at http://multimedia.uga.edu/media/images/Das_KC-UGA-UPR_biofuels.jpg.

Cutline for photo: A $4 million Department of Defense-funded collaboration between the University of Georgia and University of Puerto Rico taps UGA expertise in growing algae for biofuels. The partnership will create a renewable energy center that addresses the energy-independence needs of the Caribbean territory. Pictured is K.C. Das, professor of biological engineering at UGA and a co-principal investigator for the project.