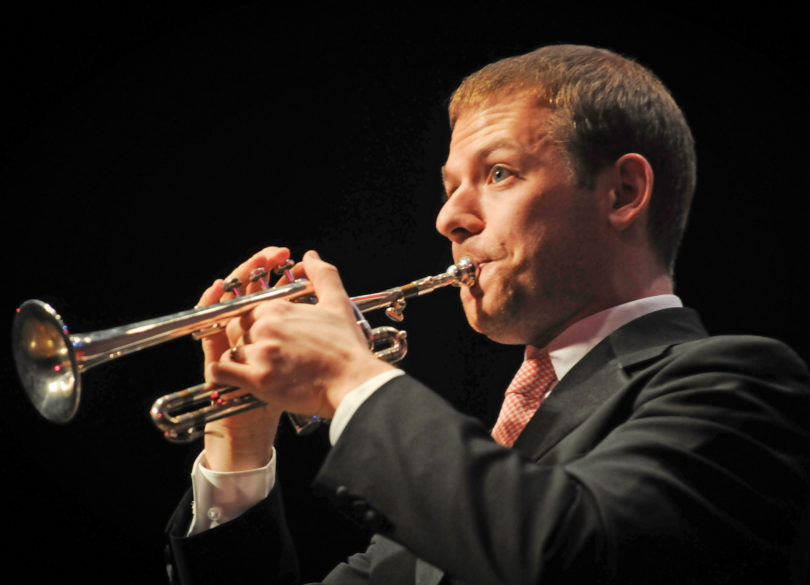 The Performing Arts Center will present trumpeter Caleb Hudson, a rising young star on the classical music scene, in a recital Nov. 11 at 8 p.m. in Ramsey Concert Hall.

Tickets for the recital are $28 and are free to UGA students with valid ID card. Tickets can be purchased at the Performing Arts Center, online at pac.uga.edu or by calling 706-542-4400.

Hudson graduated from the Juilliard School in 2012 with a master of music degree, and in 2013 he became the youngest member of the world-famous Canadian Brass. The Lexington, Ky., native is an active performer in New York City where he made his solo debut with the Chamber Music Society of Lincoln Center performing Bach’s Brandenburg Concerto No. 2 in Alice Tully Hall. In 2010, he performed in the New York premiere of John Adams’s City Noir at Carnegie Hall.

Hudson has received multiple first prizes in the National Trumpet Competition, in the solo division in 2001 and 2004, and as a member of the Juilliard Trumpet Ensemble in 2009 and 2010. He has performed with the New York City Ballet, New World Symphony, Symphony in C, New York Trumpet Ensemble and the American Brass Quintet.

For his Ramsey Hall recital, Hudson will be accompanied by pianist Stephanie Wu, a Juilliard School graduate who teaches at the Geneva School of Manhattan’s Conservatory of Music. The recital will be recorded for broadcast on American Public Media’s Performance Today, heard by more than 1.3 million listeners across the country.

Hudson’s recital is part of the Spotlight on the Arts at UGA, a nine-day celebration of the arts.