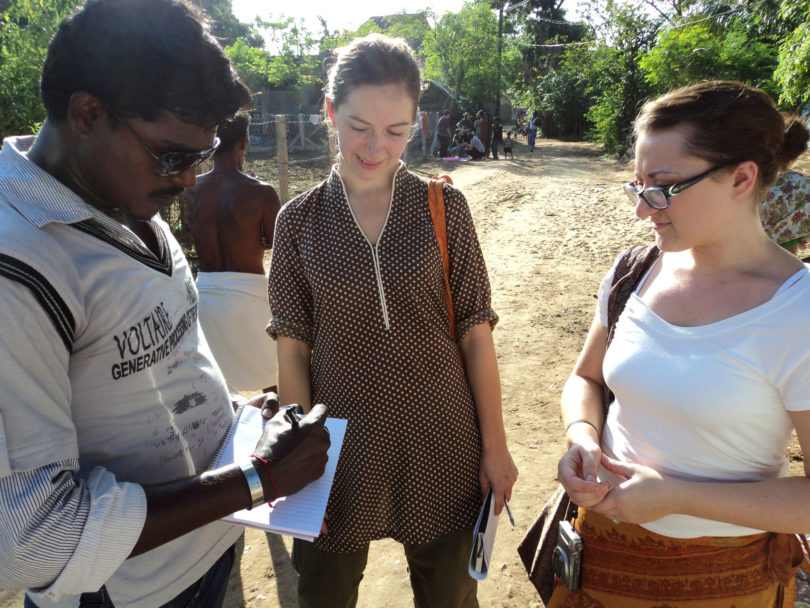 Athens, Ga. – University of Georgia students and faculty from the College of Environment and Design recently joined Oxford Brookes University of England in a unique design process in rural India. The trip was coordinated by Oxford’s Center for Development and Emergency Practice.

Using a set of tools referred to as Participatory Rapid Appraisal, the group conducted assessments of the area from the vantage point of community members. In less than two weeks, the team helped local residents and other participants understand the details of human environmental needs in the community and create a report that will help guide design decisions as the area experiences change.

The PRAs were conducted in two small villages, Vizhuntha Muvadi and Gramathu Medu in the Nagapattinam District in the Indian state of Tamil Nadu. Vizhuntha Muvadi sits directly on the Bay of Bengal and depends on the fishing industry, while Gramathu Medu is a short distance inland where its residents concentrate on rice production and handicrafts. Each was impacted by the tsunami in 2004. This PRA was focused on revisiting the recovery efforts and determining if risk and vulnerability had been reduced since 2004. A final PRA report can be found on the CED’s website at www.ced.uga.edu.

This trip was centered on a new disaster affecting the region. “A few days before the UGA travelers arrived in South India, cyclone Thane hit the Puducherry district and communities directly north of Nagapattinam,” said Cassity. “The immediacy of the cyclone gave greater meaning and depth to the appraisal/design process, not to mention a new respect for the power of natural disasters of this magnitude.”

The partnership with Oxford Brookes is a new one, initiated when two UGA landscape architecture students, with support from UGA’s Graduate School and CED, participated in a field excursion to Goa, India in January, 2011.

Stephanie Wolfgang, a third year M.L.A. student and one of the participants from 2011, described the trip as an informative and eye-opening approach to community evaluation. “Americans rarely are exposed to vulnerability in the same sense that is experienced in developing countries,” she said. “These trips to India provide us with a first-hand experience of that vulnerability, as well as an amazing opportunity to learn from other graduate students in related disciplines from a country outside of our own.”

Wolfgang’s support of the program and positive influence on faculty and other students made this year’s return trip inevitable. One of the unique tools used in their work included participatory mapping with different colors of rice powder which were used to create images on the ground to which residents could relate. Native social work students helped with translation as designers interacted with the community.

Cassity and Melcher received sponsorship from UGA’s Venture Fund for the trip. “This was a welcome component for teaching effectively the importance of planning and design strategies in emergency and critical community development,” said Melcher.

“Students and faculty need to have this kind of ‘in-the-trenches’ work to make us better designers, planners, conservationists, teachers and learners,” said Cassity, who also directs the CED’s public service and outreach efforts. “There is no better place to experience that than in the context of the world’s most populous and rapidly developing country of India.”

Melcher worked in Southeast Asia after the historic Indian Ocean tsunami in 2004; Cassity has worked in Ghana and Thailand, among other global locations.