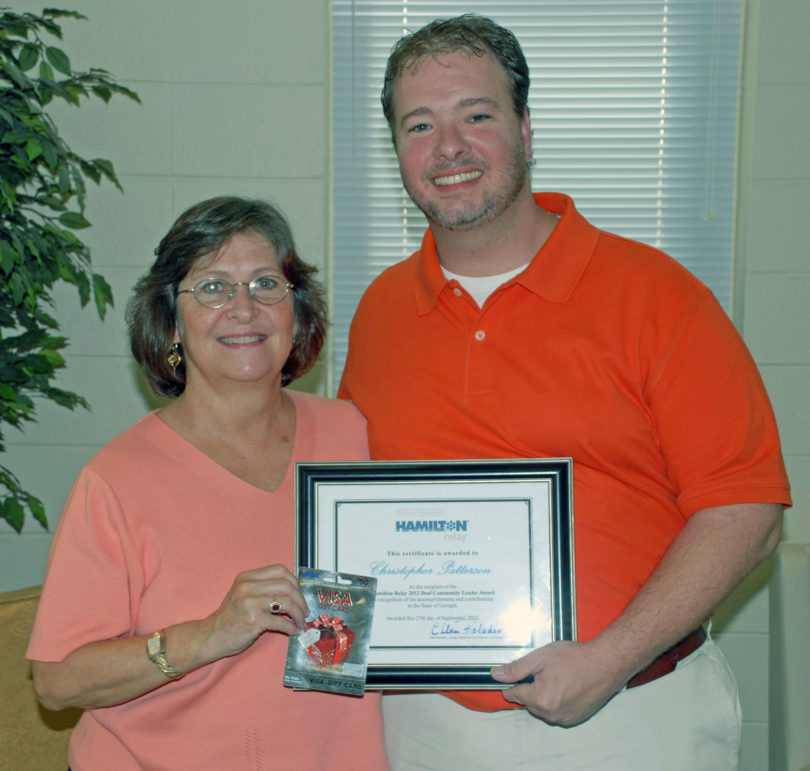 Patterson, an American Sign Language lecturer and adviser to the ASL Dawgs Club since 2011, is a faculty member in the college’s department of communications sciences and special education.

Patterson, who is deaf, uses sign language to deliver his lectures, advise students and communicate with others on and off campus. “He has become a force for advocacy for individuals who are deaf, devoting countless hours of his time on a local as well as state and national level,” said Ellen Rolader, state outreach coordinator for Hamilton Relay.

The award recently was presented to Patterson at a small gathering of his friends, students and colleagues at in the College of Education in which sign language was used almost exclusively in both the presentation and his acceptance. Patterson signed that he could tell there was more public awareness of people with hearing disability in the Athens community and credited UGA for the trend.

“I went to My Pie the other day,” he signed as a colleague interpreted. “I began to point at pictures of the items I wanted on my pizza because I’m used to having to do that to communicate. But I was pleasantly surprised when the person at the counter started signing back. And I thought, ‘Wow. That’s really cool. The awareness is really growing.'”

Patterson has been actively involved with the Georgia Advocacy Office to ensure medical professionals have the resources to provide effective communication, and he has advocated for the state to accept ASL as a foreign language in public schools. He also partnered with the Georgia Association of the Deaf and Georgia Registry of Interpreters for the Deaf to host workshops for deaf individuals looking to become certified deaf interpreters.

In addition, Patterson advocated for the state to adopt the Deaf Child Bill of Rights and was co-chair of the first Deaf Children’s Literacy Benefit Gala in Atlanta, which gained exposure for ASL and literacy issues surrounding children who are deaf and hard of hearing.

From 2011-2012, Patterson served as director of the Junior GAD, a program that offers deaf and hard of hearing students in seventh through 12th grade opportunities to develop leadership skills, learn and demonstrate citizenship, and interact with students from other schools and states. He has served as a region representative to the National Association of the Deaf and will serve as conference chair for the NAD conference in Atlanta in 2014. Additionally, he has served as board member, officer, vice president and president of the GAD and has served as chair of fundraising and conferences since 2003.

The communication sciences program at UGA prepares students to become professionals who provide prevention, evaluation and intervention services for clients from birth to adult with speech, language, voice, resonance, swallowing and/or hearing disorders. The program in speech-language pathology is accredited by the Council on Academic Accreditation in Audiology and Speech-Language Pathology of the American Speech-Language-Hearing Association and approved by the Georgia Department of Education.