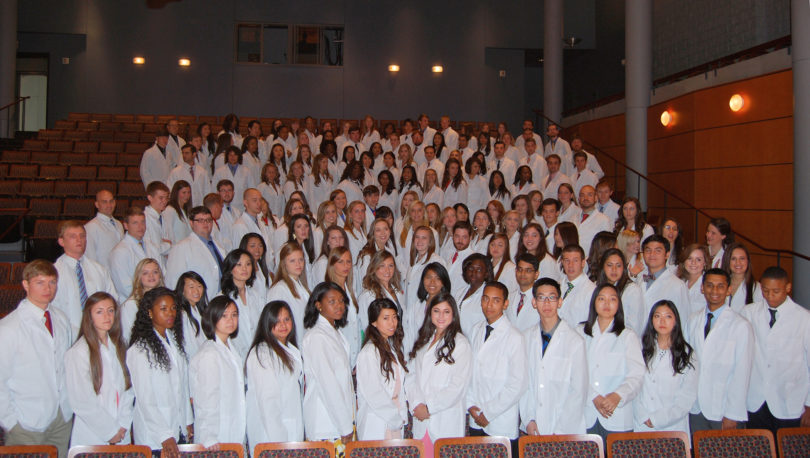 The College of Pharmacy welcomed its class of 2018 on Aug. 16

Athens, Ga. – The University of Georgia College of Pharmacy welcomed 138 new students with its annual White Coat Ceremony on Aug. 16. At the event, the class of 2018 received white lab coats to mark the beginning of their pharmacy careers.

The white coats serve as a reminder of the responsibilities student pharmacists must embrace as critical members of health care teams.

College of Pharmacy Alumni Council president James Holley, who received his doctor of pharmacy in 1996 and is a pharmacy informatics systems consultant for Healthcare IS in Monroe, was the keynote speaker. Kroger pharmacy coordinator Russell Segraves of Braselton, who graduated in 1999, represented Kroger Pharmacy as sponsor of the event. Alumni council members Pat Knowles of Evans, class of 1984, and Melissa Groover of Savannah, class of 2004, assisted incoming students as they received their white coats.

The grade point average for the 138 students is 3.52, with an average PCAT, or pharmacy college admission test, score in the 81st percentile. Of the class of 2018, 68.8 percent are female, 36.2 percent have a bachelor’s degree or higher and 4.3 percent are from out of state.

For more information on the UGA College of Pharmacy, see http://www.rx.uga.edu/.