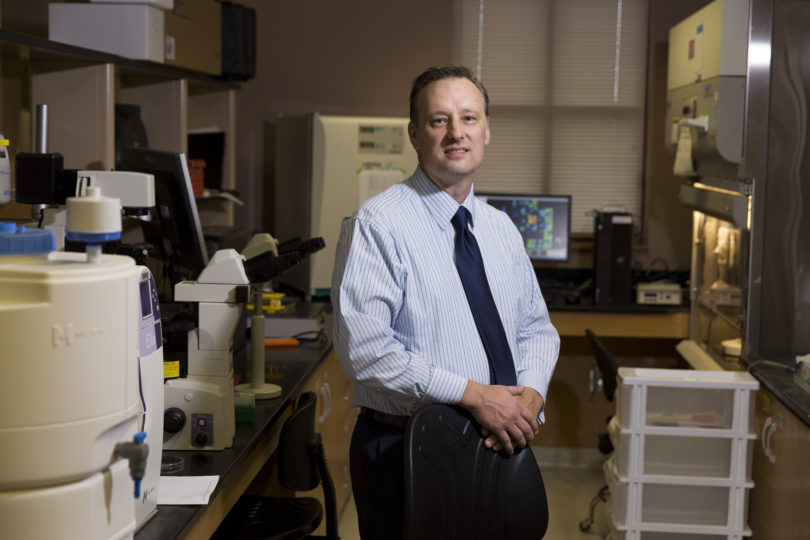 The National Academy of Inventors has named a University of Georgia faculty member who is a leading researcher in regenerative medicine to the 2017 class of NAI Fellows.

Election to NAI Fellow status is a professional distinction accorded to academic inventors who have demonstrated a prolific spirit of innovation in creating or facilitating outstanding inventions that have made a tangible impact on quality of life, economic development and the welfare of society. Six UGA faculty members have been named NAI Fellows since the honor was established in 2013, and an additional Fellow joined the faculty last year.

“The election of Steven Stice as an NAI Fellow highlights the innovative research conducted at UGA,” said Vice President for Research David Lee. “We join NAI in celebrating his contributions to science and society.”

Stice, the D.W. Brooks Distinguished Professor in the College of Agricultural and Environmental Sciences, has led industry and academic research teams in the area of pluripotent stem cells for over 25 years. At UGA he has conducted pioneering work in developmental biology and genetics to advance animal and human medicine. His group derived some of the original human pluripotent stem cell lines placed on the first National Institutes of Health human embryonic stem cell registry. Stice was a key member of the team that produced the first cloned rabbit in 1989 and the first cloned transgenic calves in 1998 (George and Charlie), for which he was granted the first U.S. patent in cloning animals. He has produced the first genetically modified pluripotent stem cells derived from pigs and cattle and, more recently, in avian species.

His research has led to 16 U.S. patents in stem cells, cloning and regenerative medicine, including the first U.S. patent on animal cloning and therapeutic cloning from adult animal cells. Multiple startup companies have been based on his technologies. ArunA Biomedical, the first company to commercialize a product derived from human pluripotent stem cells, is now using this original stem cell technology as a basis for preclinical human therapeutics and drug delivery.

Currently, the Stice lab is collaborating with ArunA Biomedical to develop proprietary exosomes for the treatment of central nervous system injury and neurodegenerative disorders, with an initial focus in stroke. Exosomes—tiny structures shed from cells—are cargo carriers that independently or, when packaged with therapeutics, change the behavior, improve the survival and repair of injured cells, reduce inflammation and attack tumor cells while remaining invisible to the body’s own defenses. Their proprietary manufacturing process will have the ability to noninvasively reach the site of injury without adverse responses while reducing inflammation of the brain and improving neural function.

“Steve’s innovative research and entrepreneurial spirit exemplify UGA’s emphasis on translating research discoveries into products that benefit the public,” said Derek Eberhart, director of UGA’s Innovation Gateway. “He has been an integral contributor to the university’s innovation ecosystem, which has generated more than 675 products and 160 companies based on UGA research.”

Stice’s longstanding commitment to growing the life science industry, as well as the advancement of regenerative medicine research and commercialization, was recognized in 2017 when he received the Industry Growth Award from Georgia Bio. He has founded five biotech companies, including four startups in Georgia that have generated more than 100 jobs.

He has published more than 125 peer-reviewed manuscripts and has been an invited speaker at over 200 research conferences, symposia and industry events. In 2016, Stice was invited to serve as a member of the Science Advisory Board to the National Center for Toxicological Research of the Food and Drug Administration. Recently he led UGA’s participation in a successful bid for $20 million in funding from the National Science Foundation to establish an Engineering Research Center for Cell Manufacturing Technologies in collaboration with the Georgia Institute of Technology and other partner institutions.

The university’s innovation programs rank highly, placing top five among all U.S. universities for new products reaching the marketplace for the fourth consecutive year. During the past two years, UGA’s efforts to facilitate industry engagement and catalyze economic development resulted in a 30 percent increase in the number of new inventions and licensing revenue, a 40 percent increase in the pipeline of startup projects, and more than 140 new products reaching the market. Innovation Gateway, formed in 2015 to streamline the path from laboratory or field to marketplace, also brought in $1 million in new grants. The UGA I-Corps Site, a STEM-focused accelerator program funded by a $500,000 grant from the National Science Foundation, launched this fall and helps teams from across the university transition their research discoveries to market-ready products and services.