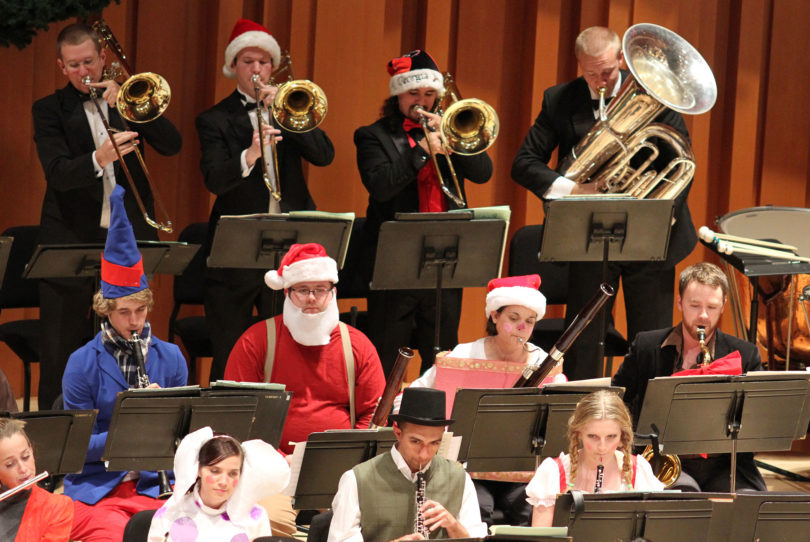 The UGA Holiday Concerts are a cherished tradition of the Athens community.

Athens, Ga. – The University of Georgia Holiday Concerts, a tradition of the Athens community, returns Nov. 29-30 at 8 p.m. in Hodgson Hall.

The concerts bring together the UGA Symphony Orchestra and choral ensembles under the baton of Professor Mark Cedel. The nearly 300 student singers and instrumentalists will lead an evening of selections that include new and familiar seasonal songs and an audience sing-along.

“The concerts have become a staple of the holiday season and remain some of our most popular performances each year,” said Dale Monson, director of the UGA Hugh Hodgson School of Music. “The joyful choral and orchestral music we bring to the halls each year-much of it known and familiar-rekindles the cheer and goodwill we all feel around the holidays.”

The 2012 Holiday Concerts are sponsored by William and Dolly Barstow and Mary Denmark Hutcherson, in memory of Leila Daughtry Denmark.

Tickets for the program, part of the Hugh Hodgson School of Music’s 2nd Thursday Scholarship Concert Series, are $25 for the general public and $5 for students. For tickets, call the UGA Performing Arts Center box office at 706/542-4400 or see www.uga.edu/pac.

Established in 1980, the 2nd Thursday Scholarship Concert Series offers showcase performances by UGA students and faculty the second Thursday of each month throughout the academic year. Proceeds from individual ticket sales and season subscriptions allow for yearlong academic scholarships and assistantships for students and presents donors with the opportunity to sponsor individual music school students at several levels of giving. In 2011, the 2nd Thursday series provided scholarships to 30 students based on faculty recommendations, academic achievement and performance ability.

After the winter break, the series continues Jan. 10 at 8 p.m. in Hodgson Hall as Distinguished Professor of Piano Evgeny Rivkin takes the stage for an evening of selections from the 18th and 19th centuries.

For more information on the 2nd Thursday series or the school of music, see www.music.uga.edu.