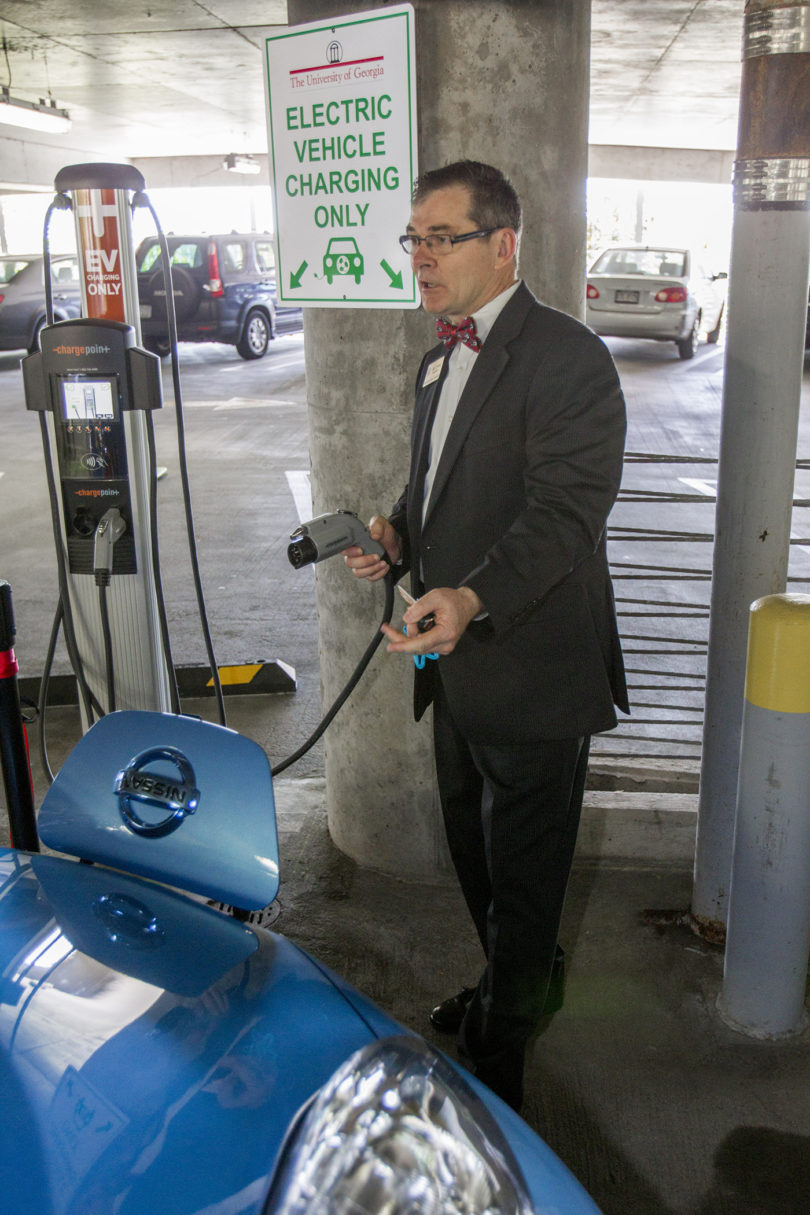 Automobile owners looking for a place to plug in instead of gas up now have a dedicated electric vehicle charging location on the UGA campus.

On May 7, the university unveiled a level 2 electric vehicle charger-the first public charger in the Athens area-on the Jackson Street side of its North Campus parking deck. Level 2 chargers are able to fully power a vehicle in two hours, compared to level 1 chargers, which use lower wattage and take at least four times as long. The charger has two plugs and corresponding parking spots.

“Of the 21,000 spaces on campus, we chose the best two to represent our commitment to sustainability,” said Don Walter, manager of Parking Services.

Lately, Parking Services has had more people ask about having a charger on campus, he said. Through a partnership between Parking Services and the Office of Sustainability, they were able to meet the need of faculty, staff, students and visitors who live in or travel to the Athens area.

Tim Echols of the Georgia Public Service Commission is one of those visitors. He and his wife live in Bogart and leased a Nissan LEAF last fall. On May 7, his car was the first vehicle charged on campus. Echols, who has three degrees from UGA, said that driving an electric car was a matter of leading by example.

“As an energy organization in Georgia, it’s important for us (the Georgia Public Service Commission) to speak in a knowledgeable way,” he said, about vehicles that are powered by something other than gasoline. He plans to use the charger when he has meetings on campus or in downtown Athens.

Before plugging in his car, Echols pulled out several charge cards, each designed to work at a different charging location. It’s something with which most electric vehicle drivers are familiar, he said.

The UGA location is part of the ChargePoint Network, and users may pay with their ChargePoint card or with a credit card. Currently, the service is free-the only cost to users is a fee to access the deck. At the beginning of fall semester, rates will start at 75 cents an hour for the first two hours and then increase to $1.50 per hour.

Echols said he hopes to see more electric vehicle owners coming to UGA to conduct research-the main library is several hundred yards from the North Campus parking deck-and to attend sporting events now that they have the confidence to know they can get back home.”

Depending on how much the charger is used-and how successfully-the university will consider installing other charging stations on campus, Walter said.