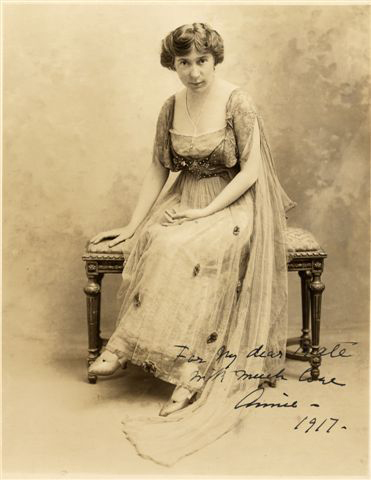 Born in England, Russell was a stage star from a young age in Canada before moving to New York to perform on Broadway. By the 1880s, she was one of the most popular and successful stage actresses—a contemporary of Ethel Barrymore, Edwin Booth and Maude Adams. In 1905, she traveled to England where she originated the role of Barbara Undershaft in George Bernard Shaw’s “Major Barbara.”

The films are part of the Pebble Hill Plantation Film Collection (c. 1917-c. 1976), which includes Georgia’s earliest home movies and were donated to the Brown Archives last year. Pebble Hill, just outside Thomasville, was bought in 1896 by Howard Melville Hanna of Cleveland, Ohio, as a winter home. In 1901, he gave the property to his daughter, Kate Hanna Ireland, and her children Livingston and Elizabeth “Pansy” Ireland. Pebble Hill’s trustees donated the family’s films to the archives in order to preserve their unique scenes of the family and property.

“Twenty-eight mm film is an early home movie and industrial/educational film format that was on the market in the U.S. from 1913 through the late 1920s,” said Margie Compton, a film archivist at UGA. “Thankfully, collections like this which contain 28mm films are still coming to light and we are learning more about the format. We work with Colorlab in Rockville, Md., to provide us with new film 35mm preservation prints and digital masters so the public can continue to enjoy the films for another 100 years.”

Compton consulted a privately published history of the Hanna family. The history mentioned that the Irelands met Russell through a mutual friend, and that Russell’s home in Maine was later bought by Livingston Ireland. When one of the home movies showed a couple at a shingled cottage in a setting that looked like Maine, Compton focused on whether the couple was Russell and her actor husband, Oswald Yorke. Online images from the New York Public Library and from the archives at Rollins College in Winter Park, Fla. (where Russell spent her last years), indicated that it was probably Russell in the films.

Compton traveled to the Olin Library at Rollins College and showed the film to archivists Wenxian Zhang and Darla Moore, who preserve Russell’s papers and photographs, and to theater professor Jennifer Cavenaugh, who has researched and written about Russell. They confirmed that the couple in the film was Russell and Yorke, probably in the summer of 1917 or 1918 at Russell’s Maine home. They had never seen moving images of Russell.

“Seeing this footage is tremendously exciting for those of us at Rollins who have heard so much about the legendary Annie Russell’s talent and charm—a quality that definitely comes through in these films,” said Moore.

A second reel shows Russell visiting Boxhall Plantation, five miles from Pebble Hill Plantation, and a third shows her at Pebble Hill with Pansy Ireland and her stepfather, Perry Harvey, along with hunting dogs and the dog handlers at the plantation’s kennels. Those films may date to 1919.

Pebble Hill historians have documentation of Annie Russell visiting Thomasville on more than one occasion. “We know that Miss Russell was a close friend of Kate Ireland and her children and that is certainly borne out in these films,” said Warren Bicknell III, president of the Pebble Hill Foundation said. “The research being done at the Brown Media Archives is an extremely valuable contribution to the ongoing effort to better define the history of South Georgia and Pebble Hill Plantation.”

Ruta Abolins, head of the Walter J. Brown Media Archives and Peabody Awards Collection said that knowing UGA holds what may be the only films made of such a prominent stage actress is very exciting. “This shows how valuable archival film, especially home movies, can be in expanding our knowledge of historic persons and events,” she said.

Plans are being made to screen the films in April at the Annie Russell Theatre at Rollins College after performances of the final play of its 80th season. A copy of the footage of Russell will be donated to the Rollins archives, augmenting the substantial amount of Russell material they currently preserve.