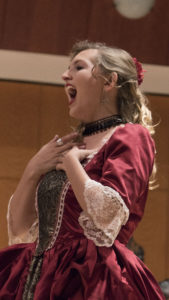 The Hugh Hodgson School of Music University of Georgia Opera Theatre is starting off the new decade with fan-favorite Il Barbiere di Siviglia (The Barber of Seville) by Gioachino Rossini Feb. 21-23 in the Fine Arts Theatre.

UGA Opera Theatre will offer a very different experience from the fall production of Lucia di Lammermoor with the presentation of one of the most famous opera comedy in the world, with music many will recognize from TV commercials, children’s cartoons and sitcom background music.

“Now you will get to hear the original version, live and fully staged,” said Frederick Burchinal, the Wyatt and Margaret

Anderson Professor in the Arts and director of UGA Opera Theatre.

Since the opera’s debut in 1816, it has become one of the 10 most performed operas in the world to this day with 509 performances worldwide in 2017-2018. The opera itself is an adaptation of a play from French writer Pierre Beaumarchais, who followed Il Barbiere di Siviglia with a continuation of the storyline with Le nozze di Figaro (The Marriage of Figaro), which the UGA Opera presented in spring 2018. This version of Beaumarchais’ play was written by Rossini.

The leading lady singing Rosina will be Jaime Webb, who audiences heard last spring as Norina in Donizetti’s Don Pasquale. The other female role in the opera, Berta, Rosina’s maid, will be sung by both Emma Robertson and Tarryn Ballard on alternate performances.

Eleftherios Chasinidis will be returning to sing the purposely hilarious character of Don Basilio. The cast is completed by Hugh Hodgson School of Music students. Jacob Martin will be singing the role of Figaro. Paul Gamble Jr. will perform as the befuddled, amusing Doctor Bartolo. Andrew Ellis takes on several “roles” singing the demanding and beautiful music of Rosina’s lover, Count Almaviva. Harrison Stenson will round out the cast as Fiorello.

The production will be led by the international conductor Hilary Griffiths, who will be returning from Germany for the fourth time to lead the opera orchestra. UGA Opera Theatre also welcomes stage director Nicholas Muni to the opera team. Principal opera coach Kathryn Wright has been preparing the singers for their roles.

The opera is sung in Italian, but audiences will be able to “understand” every word through Supertitle translation in English clearly displayed above the stage for everyone to have a comfortable and enjoyable experience.

Tickets for the spring opera are $20 for adults and $3 for students and are available at pac.uga.edu. The Feb. 21 performance will be presented admission-free for all UGA students with a valid UGA ID. The Feb. 21 and Feb. 22 performances will take place at 7:30 p.m. with a Feb. 23 matinee at 3 p.m. Parking is available at the Hull Street Deck near the UGA Fine Arts Theatre.