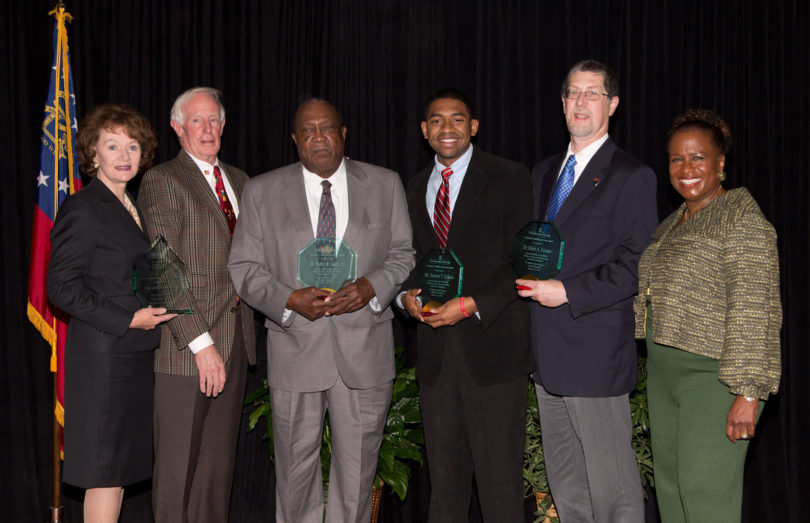 Those receiving awards at the 2013 Martin Luther King Jr. Freedom Breakfast from left are Kathy and Tom Kelly

Mark Farmer, professor of cellular biology and chair of biological sciences at UGA; Walter Allen, a former adjunct professor in the department of educational psychology at UGA; and Stewart T. Zellars, a UGA senior majoring in economics and statistics all received the 2013 President’s Fulfilling the Dream Awards for their work in the Athens-Clarke County community to make King’s dream of equality and justice a reality.

Allen works with students interested in international education and assists American and African students in finding scholarships. He also recruits teachers willing to work in Africa for one academic year.

Allen taught at the United States International University in Africa where instead of drawing a salary, he used the money to fund scholarships for African students who otherwise could not afford to study at the university. He also sponsored several students on his own. He helped to establish an exchange program between the university and historically black colleges and universities in the U.S., a program that is still operating at 15 colleges in the U.S., including non-historically black schools. He was a volunteer helping in Rwanda during the Rwandan genocide and crisis.

Farmer works to get students from underrepresented groups interested in science, technology, mathematics and engineering. He’s worked with the Summer Undergraduate Research Program and Louis Stokes Alliance for Minority Participation to help students see the value in these fields.

Through his faculty position, Farmer has helped foster the careers of young scholars in the biological sciences. Over the last 15 years, he’s had more than a dozen undergraduates from underrepresented groups in the sciences conduct independent research in his lab.

Farmer, who lives in Winterville with his wife and two children, is co-organizer of “LemonAid,” a UGA-based volunteer partnership with local schools.

Zellars, an Augusta native, is president of the Black Educational Support Team, a program based out of UGA’s Multicultural Services and Programs that partners African-American freshmen with upperclassman leaders. The organization is designed to help the freshmen meet other students and administrators and get acclimated to the UGA campus.

He also has served as a resident assistant, a site leader for IMPACT (formerly known as Alternative Spring Beak) and as both a Franklin College senator and Freshman Board director for the Student Government Association.

After Zellars graduates in May, he plans to teach secondary mathematics in Detroit, Mich., as a part of the Teach for America program.

Also at the breakfast, the Impact Award was presented to Tom and Kathy Kelly for their commitment to promoting diversity, equity and social justice in the community.

The Kellys were recognized for their work with the Greensboro Dreamers, a program they founded in partnership with the national “I Have a Dream” Foundation to help Greensboro youth both graduate from high school and succeed in college. The program started in 2000 with 54 first-graders at Greene County Elementary School. The group participated in after-school programs, went on more than 70 field trips to colleges, concerts, museums, Broadway shows and sporting events and more. In May 2012, 45 Dreamers graduated from high school and 42 of them are attending college or trade schools. Currently, 23 of the Dreamers are HOPE scholars. The Kellys have raised more than $4 million in federal and state grants, which have enabled close to 300 other students to attend after-school and summer academic programs.

Monica Kaufman Pearson, retired veteran anchor of WSB-TV’s Channel 2 Action News in Atlanta and current graduate student in the Grady College of Journalism and Mass Communication, was the keynote speaker for the event.

The Martin Luther King Jr. Freedom Breakfast, the President’s Fulfilling the Dream Awards and the Impact Award are spearheaded by the UGA Office of Institutional Diversity. For more information about the office, see http://diversity.uga.edu.