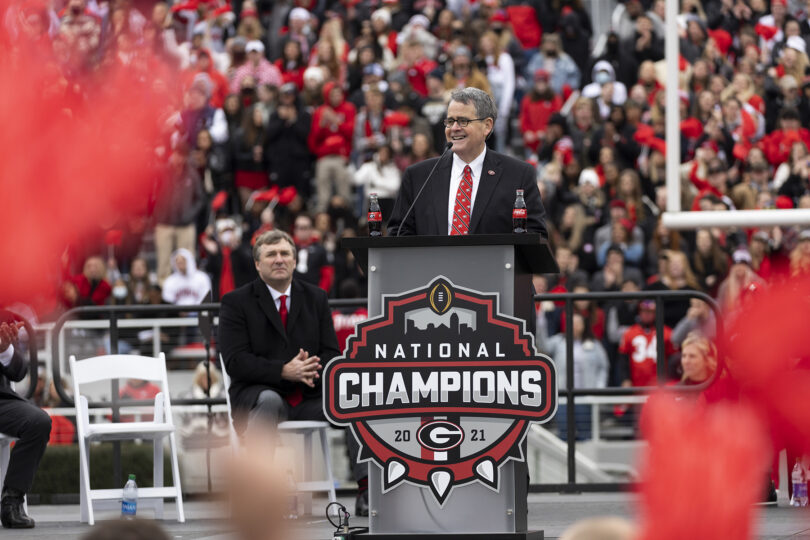 While the schedule of a university president is always busy, the 2021-22 academic year has been especially fast paced for University of Georgia President Jere W. Morehead.

This fall, UGA’s enrollment topped 40,000 students, the university’s largest ever, and the institution set records for student success, research productivity and economic impact. The Bulldogs also captured their first national championship in football in 41 years.

Yet, amid the demands of piloting Georgia’s flagship land- and sea-grant institution, UGA’s 22nd president also serves as a prominent figure in intercollegiate athletics, occupying key leadership roles across the foremost governing bodies of college sports. Through these positions, Morehead works closely with others to guide college athletics during a transformational era while seeking to improve the student experience for current and future student-athletes.

Last August, Morehead began a two-year term as president of the Southeastern Conference (SEC). Comprised of 14 member institutions and sponsoring 21 sports across men’s and women’s athletics, the SEC is one of the five autonomy, or “Power Five,” conferences in National Collegiate Athletic Association (NCAA) Division 1. As SEC president, Morehead chairs the SEC’s Executive Committee, a seven-member panel that approves the SEC’s operating budget and oversees the conference’s fiscal affairs, among other duties. He previously served as SEC vice president from 2019-2021 and chaired two major SEC working groups devoted to compliance, enforcement and governance and to student-athlete conduct.

In addition to his SEC responsibilities, Morehead has been appointed by his peers to top leadership posts in the NCAA, the member-led governing body of intercollegiate athletics.

In 2020, Morehead was named to the NCAA Board of Governors and the Division 1 Board of Directors. The Board of Governors is the NCAA’s highest authority, overseeing association-wide issues and enacting policy affecting all three NCAA divisions. The 21-member board is composed of university chief executives, as well as five independent members, including former U.S. Secretary of Defense and CIA Director Robert M. Gates and former NBA All-Star Grant Hill.

The Division 1 Board of Directors, meanwhile, is responsible for overseeing strategy and policy, as well as management of the division, which consists of more than 350 member schools and 170,000 student athletes. Last August, Morehead was elected as its chair.

“President Morehead is deeply engaged in the most important issues surrounding college sports,” said Josh Brooks, J. Reid Parker Director of Athletics. “He understands the complex opportunities and challenges confronting our student-athletes, and that has made UGA more effective in helping us succeed at the highest levels of academics and athletics.”

Within his NCAA capacities, Morehead is playing a major role in shaping the future of American intercollegiate athletics. Last July, the Board of Governors took the historic step of convening a constitution committee to draft a new NCAA constitution aimed at better meeting the needs of student-athletes.

Morehead was soon appointed to serve on the Constitution Committee, comprised of university presidents, conference commissioners, athletic directors, student athletes and independent members from across the NCAA, and chaired by Gates. After developing a draft in consultation with NCAA members throughout the fall, the committee’s proposed constitution was adopted at the NCAA Convention in January.

“The development of a new constitution is an inflection point in the history of the NCAA,” said David Shipley, UGA School of Law professor and Faculty Athletics Representative. “This formidable effort represents a transformation of the collegiate sports model in this country, and I am grateful for how President Morehead and other members of the Constitution Committee identified the core principles of college athletics while charting a course for the future of the NCAA.  This was no easy task, as every major decision related to intercollegiate athletics is subject to potential litigation and legislative scrutiny.”

Among other measures, the NCAA’s new constitution gives students more representation across the NCAA’s governing bodies; embraces name, image and likeness benefits; and emphasizes the mental health and well-being of student athletes. The most significant feature of the new constitution, however, is that it delegates to the association’s three divisions significant authority to restructure and reorganize to address their unique challenges.

To undertake this significant work for Division 1, the Board of Directors formed the Division 1 Transformation Committee; Morehead serves as one its 21 members. Co-chaired by SEC Commissioner Greg Sankey and Julie Cromer, director of athletics at Ohio University, the Transformation Committee has already begun the enormous task of modernizing college athletics’ most visible and influential division. In the months ahead, the committee will address issues ranging from membership requirements and regulatory matters to the student-athlete experience and the Division 1 governance model.

“It has been an honor to work alongside individuals like Commissioner Sankey and Secretary Gates, as well as many outstanding college presidents, conference commissioners and athletic directors, focused on improving college sports for current student-athletes and those of the future,” Morehead said. “While our work to transform Division 1 athletics is challenging, if we keep our focus on student-athletes and their well-being, I am confident that we will make the right decisions, ensuring that our students and institutions thrive at the highest level of intercollegiate athletics.”