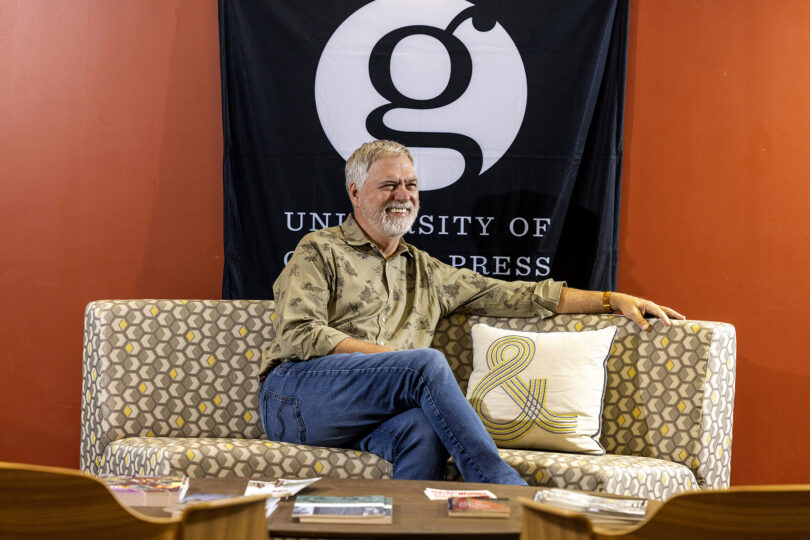 Steven Wallace is director of marketing and sales at the University of Georgia Press. (Photo by Dorothy Kozlowski/UGA)

Steven Wallace continues to be fascinated by the written word

As a child, Steven Wallace “was not a great reader.” All that changed in junior high.

“I picked up a particular book, read it and fell in love with it, and that led to a voracious appetite for reading,” he said. “Books just fascinated me.”

He’d ride his bike to Capital Book and News, enamored with the “Lilliputian volumes” lining the shelves. He quickly became a regular customer, particularly of modern classics and contemporary writers.

Wallace, who is now director of marketing and sales at the University of Georgia Press, got his bachelor’s degree in English from Auburn University and eventually began working for Capital Book and News and writing book reviews for a local newspaper.

He worked there for four years before his career took a bit of a detour and he took a position at a brokerage firm. Wallace was visiting the bookstore one day when he met a representative from Random House who mentioned they had a position open in book sales. He applied, got the job and spent more than 19 years with their team, eventually becoming division director for the Southeast selling Knopf publications.

“I learned a great deal about publishing and had the opportunity to read a lot of great books,” he said. “I had a great passion for selling them. Independent book sellers are wonderful people. They don’t invest just with money. They invest with their hearts.”

Wallace left Random House to work for a small publisher named Unbridled Books, which specialized in startup fiction and new writers, and then worked at a book wholesale business.

During all this time, Wallace said he was attracted to the University of Georgia Press’ books, particularly its histories. He met Lisa Bayer, director of UGA Press, through a friend who was doing a reading in Athens. He found out the UGA Press had a position open and has been part of its team for almost four years.

“I figured this would be a great place to work, and I wasn’t wrong,” he said.

“I’m really proud of the books we’re doing,” he said. “What the UGA Press is doing is telling stories and telling them accurately.”

In his current position, Wallace works to push UGA Press books, including print volumes and e-books, into the marketplace and get them the attention they deserve. He works with two publicists, an exhibits manager and an IT specialist who manages metadata for the publications, in addition to a marketing assistant and interns.

On any given day, Wallace might be working on marketing plans with writers, planning events or an upcoming sale, keeping up with inventory levels and interacting with customers. In fact, UGA alumni, faculty and staff all receive a 40% discount on items from the UGA Press. He considers representing the UGA Press the most important part of his job.

“The job we do is one of integrity,” he said.

But his favorite part will always be the books themselves.

“We have a lot to say,” he said. “UGA Press publishes really fine books for everyone.”

Wallace may be surrounded by words, but he is not a writer himself. Instead, he’s an avid gardener and does genealogical research on his maternal grandmother’s side, who was born 12 years after the Civil War and left recordings on Dictaphone belts. He also enjoys spending time with his family and traveling, specifically retracing the Bartram Trail.

It is that same combination of history and nature that Wallace thinks will draw readers to the “The American Chestnut,” his top pick for what’s being published by the UGA Press this fall.

“The byline of the book says ‘an environmental history,’ but this is a biography of this tree,” he said. “It is well worth reading.”