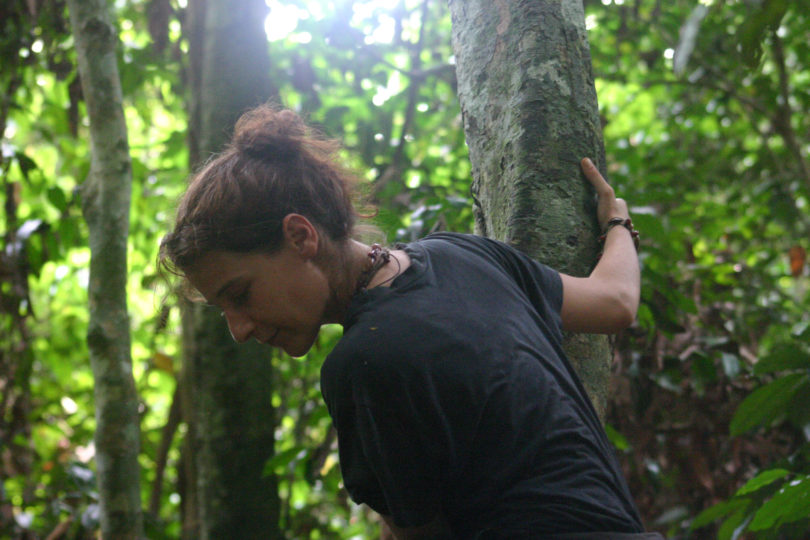 Recordings of gorilla sounds are extremely rare, so sounds used in the entertainment industry are generally not obtained from actual gorillas. In films, they are usually portrayed as screaming, aggressive beasts, when they are actually the opposite.

For this summer’s blockbuster War for the Planet of the Apes, the filmmakers contacted the University of Georgia’s Roberta Salmi, assistant professor in the Franklin College of Arts and Science anthropology department. For Salmi, who has published extensive research on vocal communication of western gorillas, it wasn’t the first time that Hollywood had come calling.

In April 2014, Salmi was contacted by Douglas Murray, the supervising sound director for Dawn of the Planet of the Apes. He learned about her from a Wired Magazine article describing her research on vocal communication of wild western gorillas.

“The article was based on my Ph.D. dissertation, for which I spent 18 months in the forest of the Northern Republic of Congo collecting over 2,000 recordings of gorillas’ vocalizations,” Salmi said. “Since the gorillas I followed every day in the Republic of Congo were fully habituated to humans, I was able to record all kinds of calls, which allowed me to describe their entire vocal repertoire and contextual use.”

Murray said that even though the movie was nearly finished, they wanted to make the apes’ vocalizations sound more realistic than in the previous film of the series.

“The animals were played by real actors and the actors themselves were making the apes’ sounds when the recordings were not available, based on recordings from other films and documentaries,” Salmi said. “Unfortunately, they didn’t have many gorilla close calls, since these sounds are very difficult to record.”

Gorillas live in small groups, typically one male and a few females with infants. In these relatively cohesive units they “chat” with each other quite often, eight calls per hour on average, Salmi said.

Once Salmi and Murray reached an agreement on their collaboration with the film project, she prepared a file with more than 40 calls of male and female gorillas from different contexts (aggression, while resting, feeding, moving) and a detailed explanation of when each call was used.

In October 2016, Murray contacted Salmi again as they were working on a new movie in the Planet of the Apes series to request authorization to use the calls from the previous film. Salmi also provided new calls as well as professional services as a consultant.

For the new film, they also wanted to record vocalizations first hand in a few zoos, for which Salmi suggested Zoo Atlanta, where she has conducted research since 2014.

“They have the largest number of captive gorillas in the U.S. and the staff there is great,” Salmi said. “Doug was able to record some calls in Atlanta—but he soon realized how difficult it is to collect good sounds even in captive settings, since gorillas are sensitive to big equipment and new people.”