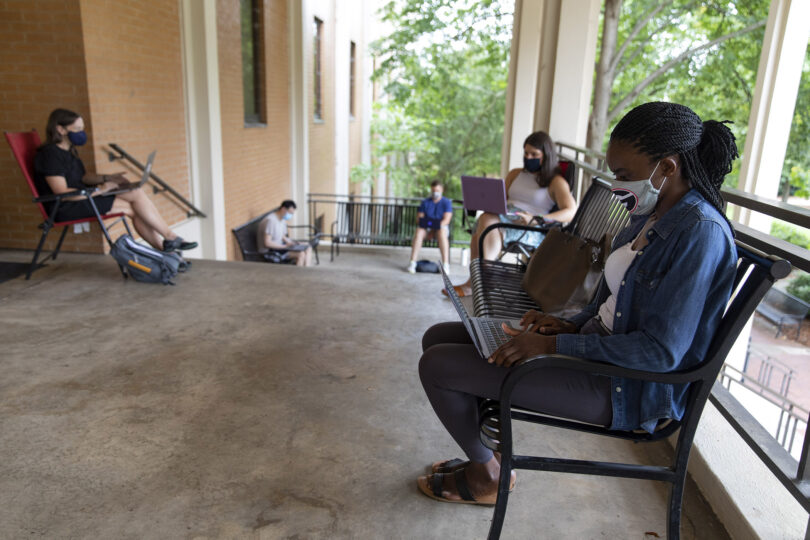 New programs and initiatives underway to build on strong foundation

Many of the University of Georgia’s efforts to foster diversity and inclusion have been in place for years, while other initiatives and programs announced in recent months reflect an intention to accelerate the university’s progress.

This strong foundation coupled with a commitment to building on past successes has earned UGA the INSIGHT Into Diversity Higher Education Excellence in Diversity Award. The HEED Award is the only national recognition honoring colleges and universities that exhibit outstanding efforts and success in the area of diversity and inclusion, and 2020 marks the seventh consecutive year UGA has received it.

“I am proud the University of Georgia is being recognized once again for our commitment to diversity and inclusion,” said President Jere W. Morehead. “Embracing these values remains critical to reaching the heights of excellence we all desire for our great University. I look forward to the additional progress that will be made in the coming year through our new initiatives.”

The university’s latest initiatives underscore the fact that diversity, and the understanding of and respect for cultural differences, are inscribed in the university’s mission statement. Diversity and inclusion goals and plans are embedded in the institution’s 2025 Strategic Plan, which was approved last year.

In August, Morehead announced a Presidential Task Force on Race, Ethnicity and Community to develop concrete recommendations that can be implemented during this academic year to continue to improve campus culture and strengthen the learning environment. In addition, Morehead has charged a Planning Committee on Diversity and Inclusive Excellence to develop a comprehensive plan, with specific goals and measures of success, that builds on UGA’s most recent diversity plan.

To enhance faculty diversity, UGA has joined the Aspire Alliance iChange Network, which is funded by the National Science Foundation. The iChange Network enables the sharing of best practices, and a committee composed of UGA faculty, staff and administrators is currently developing an institutional action plan.

The Division of Student Affairs recently launched the Department of Student Transitions to support students during key times, such as the beginning of their studies at UGA or preparation for life after graduation, with an eye toward the specific needs of underrepresented, rural, first-generation, transfer and other underserved student populations.

Other recent initiatives include the university’s New Approaches to Promote Diversity and Inclusion Grants program, which funded its second round of projects last year to increase the recruitment, retention and academic success of underrepresented student populations. The university’s African American Male Initiative, part of a larger University System of Georgia initiative, recently expanded to offer year-round programming that includes workshops, free online tutoring and mentoring. The university’s Commit to Georgia Campaign, which concluded this summer, resulted in the creation of 528 endowed, need-based scholarships through the Georgia Commitment Scholarship program.

“The University of Georgia continues to strive to build an inclusive environment, where everyone can be successful,” said Michelle Cook, Vice Provost for Diversity and Inclusion and Strategic University Initiatives. “This commitment to inclusive excellence is a core value of our institution. We are proud of what we have accomplished, while recognizing that there is still much work to be done.”

The university’s recent programs and initiatives complement efforts that have been underway for years.

Gear Up 4 College, hosted by the Office of Undergraduate Admissions, reaches underrepresented middle and high school students across the state and helps demystify the college admissions process. To engage local students, the Georgia Possible program focuses on high school students in the Clarke County School District.

Programs designed to increase the enrollment of underrepresented students include Georgia Daze, Movimiento Latino, and the Georgia African American Male Experience. Cook noted that when the COVID-19 pandemic forced the cancellation of these in-person spring events, staff from the university’s Office of Institutional Diversity transitioned them to online, virtual events.

Once enrolled at the university, students find a range of support programs and peer groups that foster academic success and build community. The university’s Early Start/Early Success program, which is administered by the Division of Academic Enhancement, provides an opportunity for first-generation students to start their college career early at UGA by becoming part of the TRIO Student Support Services program and attending the Freshman College Summer Experience.

To promote the recruitment of diverse faculty, the university’s Office of Faculty Affairs administers training for search committees on implicit biases and the recruitment of a diverse hiring pool. UGA’s voluntary Certificate in Diversity and Inclusion program has had more than 6,300 course registrations among faculty and staff since it was launched in 2012.

“The University of Georgia is strengthened by the diversity among our students, faculty and staff,” said S. Jack Hu, the university’s senior vice president for academic affairs on provost. “As a campus community, we are committed to working together to foster an inclusive environment that promotes academic excellence.”