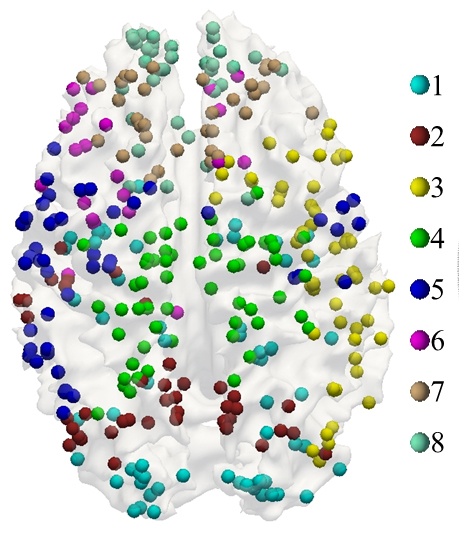 Athens, Ga. – A University of Georgia researcher who recently demonstrated a new way to map the human brain has been granted a CAREER award by the National Science Foundation to widen the scope of his research. Tianming Liu, assistant professor of computer science in the UGA Franklin College of Arts and Sciences, will map the nerve fiber connection patterns between different brain regions-called nodes or landmarks-and use the maps to identify landmarks common to all healthy human brains.

Liu’s research also aims to more accurately define the functions of brain landmarks within larger connected groups. The project will lay the groundwork for better understanding of disorders such as Alzheimer’s disease, autism, and schizophrenia, among others.

Researchers have tried for years to clearly define the parts of the brain that control particular functions, such as language or sight. It has long been assumed that certain regions handle specific tasks. Recent research, however, indicates that individual brain functions are not confined to large, single parts, but rather depend on interactions between the nodes or landmarks scattered across the brain. Groups of connected landmarks specialize in particular functions, even though the individual landmarks might be far apart and in different regions.

However, it remains to be proven if the landmarks and their connected groups match in all humans. Liu’s research will explore if all brains have the same types of landmarks, in equal numbers, and if the landmarks are all connected in the same way. The variable sizes, locations and tangled nerve strand connections of the nodes make it difficult to be sure.

Instead of mapping individual nerve connections to individual landmarks-a task akin to mapping the location of all the leaves on a tree-Liu and his team will create “trace-maps” of the overall nerve fiber connection patterns to each landmark.

“Essentially, the trace-map projects a fiber’s geometric features and can represent the global connectivity pattern of a fiber bundle,” said Liu. “We will be able to ‘fingerprint’ brain landmarks by mapping their connection patterns to other landmarks. This will enable us to identify the same landmarks in other brains.”

Once the common landmarks are identified, Liu and his team will compare the activity of landmarks in different brains dealing with the same tasks, also known as “functional activity.” Those nodes that show consistent functional activity patterns for the same perceptive or cognitive tasks can be linked to those tasks. The work will more clearly identify the functions of groups of landmarks and will aid researchers in spotting differences that occur with brain disorders.

Liu will also use his project to train students. Graduate and undergraduate students from different fields will design and collaborate on a brain image analysis project using brain scans and data gathered at UGA’s Bioimaging Research Center.

“This project will help students face complex, real-world imaging problems and bridge existing gaps in interdisciplinary brain imaging education,” said Liu. “There is a great need for students to understand the interplay between the computational and biomedical aspects of acquiring and applying brain image data.”

The NSF CAREER Award is among the most competitive research grants available from the National Science Foundation. Liu was awarded $447,339 to continue his research. In 2011, the National Science Foundation’s Division of Information and Intelligent Systems, which oversees Liu’s project, funded only 20 percent of all the proposals it received. Liu is the twenty-second researcher at the Franklin College and the fifth in the computer science department to receive an NSF CAREER Award since NSF established the program in 1994.