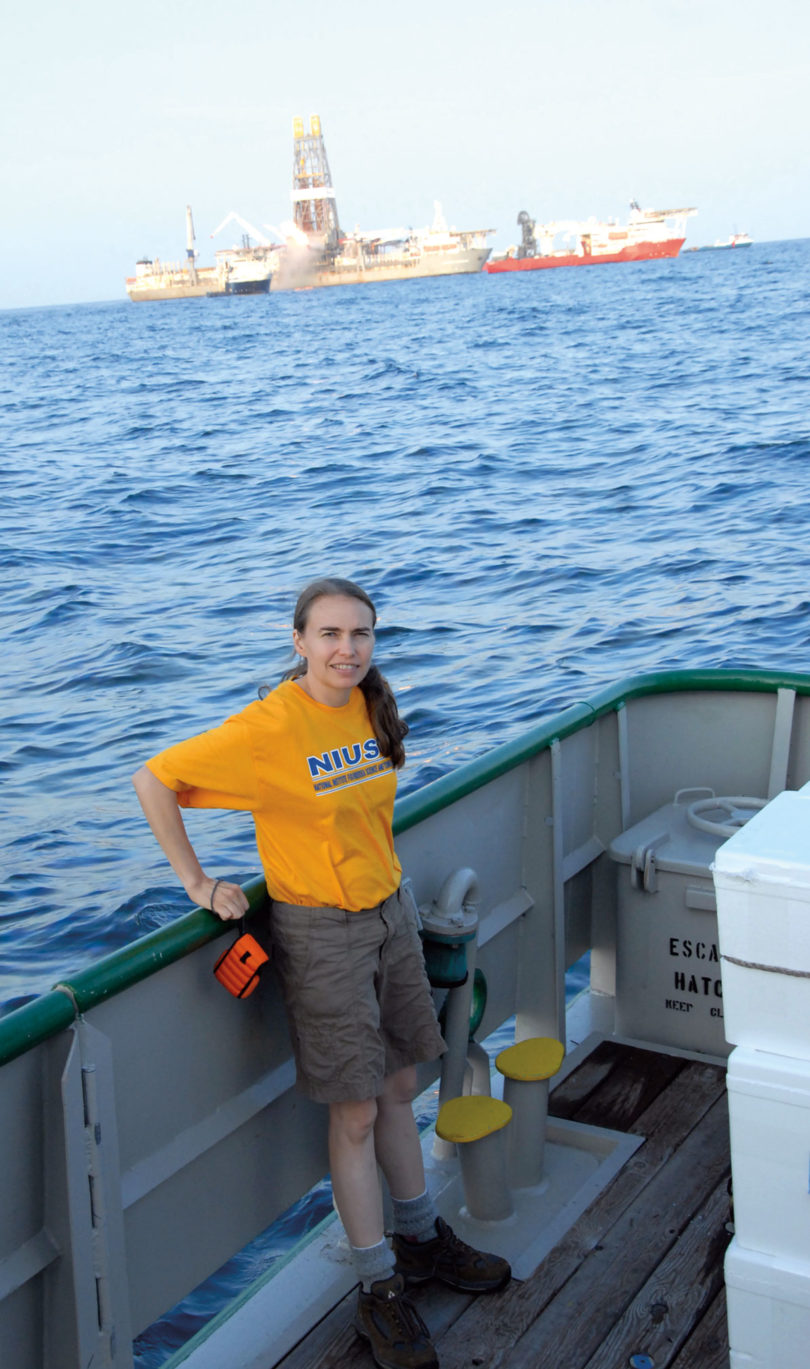 BP's Discover Enterprise burns off methane in the background as Samantha Joye stands on the RV Walton Smith during a 14-day voyage to document the underwater oil plume cased by the 2010 BP oil spill.

Athens, Ga. – A team of researchers from the University of Georgia and other institutions will return to the Gulf of Mexico to assess the environmental impacts of the 2010 Deepwater Horizon blowout that discharged roughly 5 million gallons of oil into the ocean over a period of 84 days.

The researchers will conduct a series of dives in locations near the Macondo wellhead using the recently upgraded deep submergence vessel, Alvin. Alvin is a research submarine owned by the U.S. Navy, which allows scientists to view the ocean floor, record the observations through high-definition cameras, and collect water, sediment and biological samples.

“No one has visited these sites in a human-occupied submersible since 2010, so we are very eager to evaluate the health of these locations firsthand,” said Samantha Joye, a UGA marine scientist who has studied the oil spill extensively and will be the chief scientist on the cruise. “Populations of many organisms living in the water and on the ocean floor were seriously damaged by the blowout, so we want to know how things have changed since December 2010.”

During their cruise, which will last nearly the entire month of April, Joye and her colleagues will come within 2 nautical miles of the wellhead, visiting seafloor that was covered with oil in 2010.

“We particularly want to know if the oil-contaminated sediment layers are still there,” Joye said. “It may be buried beneath a layer of sedimentation, but its effects could still be profound and we will be able to assess this.”

The researchers will also conduct dives to explore seeps located between 75 and 300 nautical miles away from the wellhead. These sites are part of a long-term microbial observatory research project examining the role of hydrocarbon-rich brine fluids expelled naturally from the seafloor on fluid and sediment geochemistry and microbiology.

“Brine-influenced habitats are analogs to ancient habitats on the Earth,” said Joye. “Studying these habitats provides a window into the past to learn about biogeochemical cycling on ancient Earth and the extreme nature of these habitats and provides us with an opportunity to discover microorganisms that are new to science.”

The research expedition is funded through a grant from the National Science Foundation and the Ecosystem Impacts of Oil and Gas Inputs to the Gulf, a program administered by the Gulf of Mexico Research Initiative.

The Woods Hole Oceanographic Institution operates Alvin for the National Deep Submergence Facility on behalf of a consortium of universities and research organizations conducting deep ocean research. In nearly 50 years of service, Alvin has made more than 4,600 dives.

Alvin became particularly famous for locating a lost hydrogen bomb in the Mediterranean Sea in 1966 and for surveying the Titanic wreckage in 1986. Through numerous improvements and upgrades, Alvin remains one of the most productive and versatile marine science vessels available.

“The Deepwater Horizon blowout released an unprecedented quantity of oil and gas into the deep ocean,” said Joye. “Alvin will give us a remarkable view of the ocean environment, and we stand to learn a lot about the long-term effects of this disaster.”