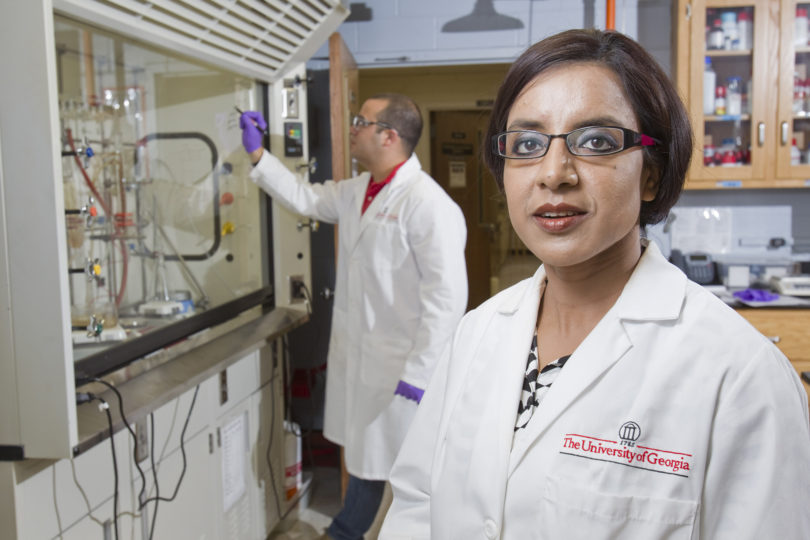 Athens, Ga. – Researchers at the University of Georgia are developing a new treatment technique that uses nanoparticles to reprogram immune cells so they are able to recognize and attack cancer. The findings were published recently in the early online edition of ACS Nano.

The human body operates under a constant state of martial law. Chief among the enforcers charged with maintaining order is the immune system, a complex network that seeks out and destroys the hordes of invading bacteria and viruses that threaten the organic society as it goes about its work.

The immune system is good at its job, but it’s not perfect. Most cancerous cells, for example, are able to avoid detection by the immune system because they so closely resemble normal cells, leaving the cancerous cells free to multiply and grow into life-threatening tumors while the body’s only protectors remain unaware.

Shanta Dhar and her colleagues are giving the immune system a boost through their research.

“What we are working on is specifically geared toward breast cancer,” said Dhar, the study’s co-author and an assistant professor of chemistry in the UGA Franklin College of Arts and Sciences. “Our paper reports for the first time that we can stimulate the immune system against breast cancer cells using mitochondria-targeted nanoparticles and light using a novel pathway.”

In their experiments, Dhar and her colleagues exposed cancer cells in a petri dish to specially designed nanoparticles 1,000 times finer than the width of a human hair. The nanoparticles invade the cell and penetrate the mitochondria—the organelles responsible for producing the energy a cell needs to grow and replicate.

The dead cancer cells were collected and exposed to dendritic cells, one of the core components of the human immune system. What the researchers saw was remarkable.

“We are able to potentially overcome some of the traditional drawbacks to today’s dendritic cell immunotherapy,” said Sean Marrache, a graduate student in Dhar’s lab. “By targeting nanoparticles to the mitochondria of cancer cells and exposing dendritic cells to these activated cancer cells, we found that the dendritic cells produced a high concentration of chemical signals that they normally don’t produce, and these signals have traditionally been integral to producing effective immune stimulation.”

Dhar added that the “dendritic cells recognized the cancer as something foreign and began to produce high levels of interferon-gamma, which alerts the rest of the immune system to a foreign presence and signals it to attack. We basically used the cancer against itself.”

She cautions that the results are preliminary, and the approach works only with certain forms of breast cancer. But if researchers can refine the process, this technology may one day serve as the foundation for a new cancer vaccine used to both prevent and treat disease.

“We particularly hope this technique could help patients with advanced metastatic disease that has spread to other parts of the body,” said Dhar, who also is a member of the UGA Nanoscale Science and Engineering Center, Cancer Center and Center for Drug Discovery.

If the process were to become a treatment, doctors could biopsy a tumor from the patient and kill the cancerous cells with nanoparticles. They could then produce activated dendritic cells in bulk quantities in the lab under controlled conditions before the cells were injected into the patient.

Once in the bloodstream, the newly activated cells would alert the immune system to the cancer’s presence and destroy it.

“These are the things we can now do with nanotechnology,” Dhar said. “If we can refine the process further, we may be able to use similar techniques against other forms of cancer as well.”