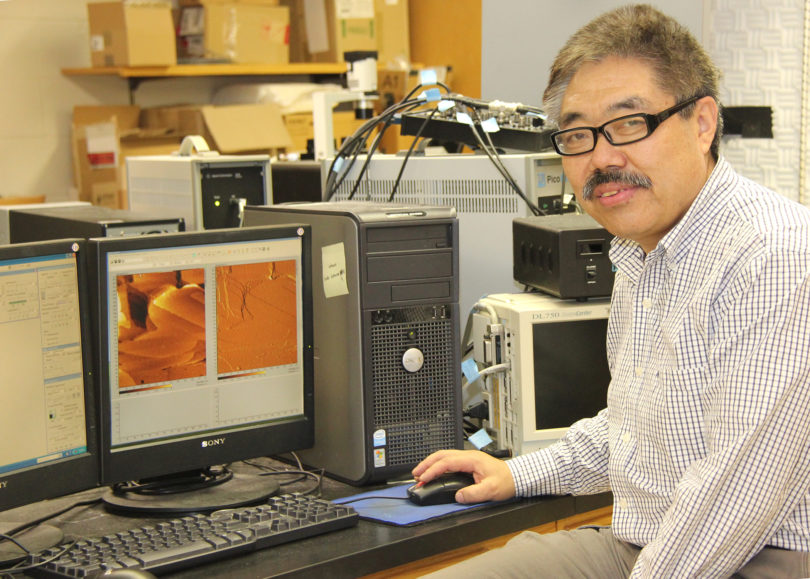 The University of Georgia's Bingqian Xu

Researchers at UGA and Ben-Gurion University in Israel have demonstrated for the first time that nanoscale electronic components can be made from single DNA molecules. Their study, published in the journal Nature Chemistry, represents a promising advance in the search for a replacement for the silicon chip.

The finding eventually may lead to smaller, more powerful and more advanced electronic devices, according to the study’s lead author, Bingqian Xu.

“For 50 years, we have been able to place more and more computing power onto smaller and smaller chips, but we are now pushing the physical limits of silicon,” said Xu, an associate professor in the UGA College of Engineering and an adjunct professor of chemistry and physics. “If silicon-based chips become much smaller, their performance will become unstable and unpredictable.”

To find a solution to this challenge, Xu turned to DNA. He said DNA’s predictability, diversity and programmability make it a leading candidate for the design of functional electronic devices using single molecules.

In the Nature Chemistry paper, Xu and collaborators at Ben-Gurion University of the Negev describe using a single molecule of DNA to create the world’s smallest diode. A diode is a component vital to electronic devices that allows current to flow in one direction but prevents its flow in the other direction.

Xu and a team of graduate research assistants at UGA isolated a specifically designed single duplex DNA of 11 base pairs and connected it to an electronic circuit only a few nanometers in size. After the measured current showed no special behavior, the team site-specifically intercalated a small molecule named coralyne into the DNA. They found the current flowing through the DNA was 15 times stronger for negative voltages than for positive voltages, a necessary feature of a diode.

“This finding is quite counterintuitive because the molecular structure is still seemingly symmetrical after coralyne intercalation,” Xu said.

A theoretical model developed by Yanantan Dubi of Ben-Gurion University indicated the diode-like behavior of DNA originates from the bias voltage-induced breaking of spatial symmetry inside the DNA molecule after the coralyne is inserted.

“Our discovery can lead to progress in the design and construction of nanoscale electronic elements that are at least 1,000 times smaller than current components,” Xu said.

The research team plans to continue its work, with the goal of constructing additional molecular devices and enhancing the performance of the molecular diode.