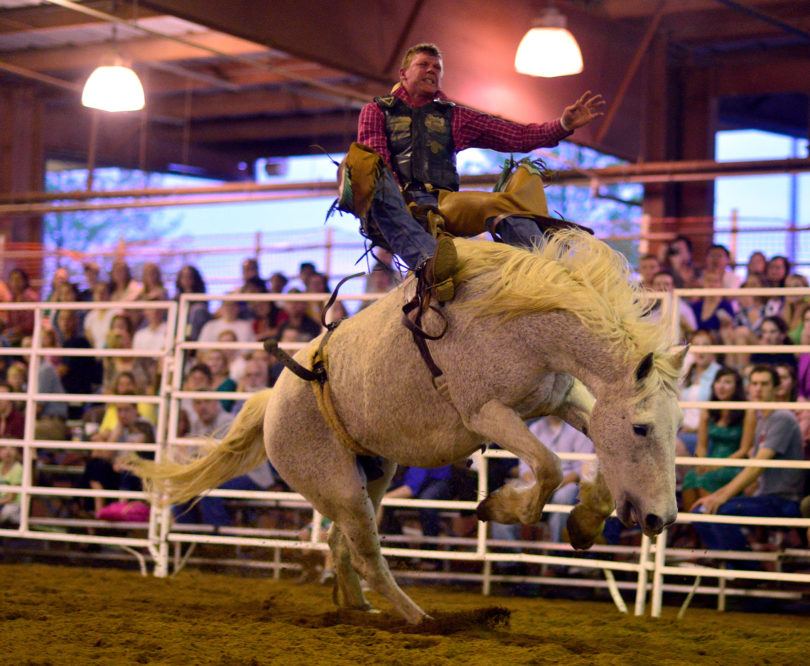 Nearly 6,000 people will gather at the UGA Livestock Instructional Arena April 10-12 to watch cowboys and cowgirls show off their skills in an event entirely organized and run by UGA students.

The Great Southland Stampede Rodeo, which will be held at the UGA Livestock Instructional Arena at 2600 S. Milledge Ave., is the result of hard work by 60 students in the UGA Block and Bridle Club.

The Great Southland Stampede Rodeo is the largest student-run professional rodeo, according to Heath Whiddon, chairman for the rodeo, which is sanctioned by the International Professional Rodeo Association.

This year marks the 40th anniversary of the rodeo. Whiddon said that in 1974, when the first rodeo was held, members of the UGA Livestock Judging Team signed a $40,000 bank note to fund the event, using items such as washing machines and pickup trucks as collateral. Since then, the event has been funded entirely through sponsorships, which students have been working hard since August to procure.

Getting sponsors is only the tip of the iceberg for the rodeo, however. The Block and Bridle Club members had to hire a rodeo announcer, interview rodeo clowns and pick out a stock contractor who will set up the arena and bring the livestock.

“I like to say the people like the announcer, clowns and contractor are the ‘gray-hairs’ of the business who keep all us young guys and girls-who aren’t real sure exactly how this goes-on track,” Whiddon said.

Students also have been manning the phone and handling online ticket sales as well as answering any questions rodeo visitors might have. Tickets are $15 for adults, $12 for children. Advance tickets, which can be purchased until April 9 at 5 p.m., are $12 for adults, $10 for children.

Organizers also have been putting up promotional materials and marketing the rodeo since early March. On the nights of the rodeo, all 60 students will be on hand and hard at work. They will be selling tickets, working the hospitality room for sponsors, acting as security or grounds crew, running a petting zoo and kids zone as well as organizing the 120 trucks and trailers and checking animal health papers.

“Those nights, it really looks like organized chaos,” Whiddon said. “It’s always amazing how everyone comes to work and next thing you know it’s running like a sewing machine.”

Whiddon said he and the other rodeo organizers have learned so many invaluable lessons putting on the event.

Along with network connections from sponsors, the students organizing the rodeo also have made lifelong friends, Whiddon said.

“I always say that at the end of the rodeo, that’s when your club’s the strongest because we just went through three weeks of some tough work together,” said the Perry native. “That Saturday after the rodeo we all go hang out, and you can just tell everyone’s become best friends.”

Each night of the rodeo has a different theme. On April 10 it will be “Tough Enough to Be a Dawg” student night. Students will be able to purchase tickets for $10 with a valid UGA ID. April 11 will be “Tough Enough to Wear Pink” night, in which the club will donate proceeds to the Breast Health Center at Athens Regional Medical Center. The proceeds from “Tough Enough to Serve Night” on April 12 will go to the organization Faces of Freedom to support U.S. troops and military veterans.

This year, the club also will establish the Great Southland Stampede Rodeo Scholarship as a way to give back to members who help organize the event. The check signing ceremony will be performed during the rodeo, and the first scholarship will be awarded in five years, Whiddon said.

“This will be just a small ‘thank you’ for someone who came out and worked really hard to make the rodeo a success,” he said.

As he reflects on the rodeo and his time at UGA, Whiddon said he hopes to see the tradition of the Great Southland Stampede Rodeo continue well into the future.

“It’s been a little stressful, I’ve gained a few gray hairs myself, but it’s been worth it,” he said. “I hope in 40 years I get to come back to the rodeo and see students doing the same thing we have been doing. It’d be very rewarding if that happened.”