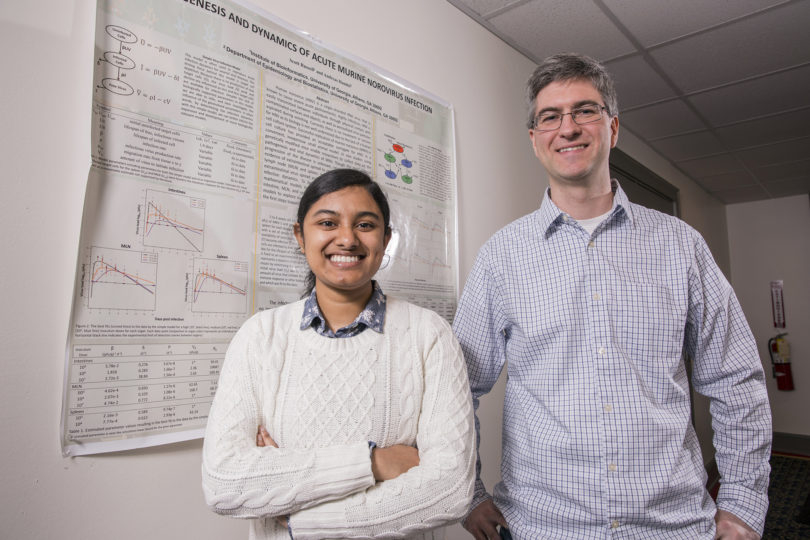 Norovirus infections, sometimes known as the stomach flu, typically last for the same amount of time independent of age or the type of norovirus with which a person is infected, according to a recent study by the UGA College of Public Health, Emory University and the Centers for Disease Control and Prevention. The study was published in the journal Epidemiology and Infection.

Symptoms from a norovirus infection last about two days, a finding that is constant between infected individuals as well as environmental settings. The incubation period, or time until symptoms start, is also consistent at 1.5 days from time of infection.

“I would have expected there to be a difference in something like a hospital setting or a difference depending on age groups,” said Andreas Handel, an assistant professor of epidemiology in the College of Public Health. “But when we analyzed the data, we didn’t see much of a difference.”

While infections tend to be most severe in the young and the old, it was not well known how the time between the infection, the onset of symptoms and the duration of symptoms might depend on age and other characteristics.

Working on this study, Devasia and Handel studied a large set of outbreaks of norovirus infections. They went through past research to collect their data, searching for norovirus outbreaks and obtaining details about the patients, the setting, means of transmission and other relevant values.

“For instance, we looked at health care settings and food service settings to see if they might show differences,” Handel said.

They also found that none of the characteristics they investigated showed a meaningful association with the duration of the time until symptoms show up and the duration of symptoms.

Understanding the time it takes before symptoms start and the duration of symptoms is important for infection control methods as well as for future computer modeling studies that are often used to evaluate the impact of a potential norovirus vaccine, which is currently in development.

Additional study co-authors are Ben Lopman of the CDC and Juan Leon of Emory University.