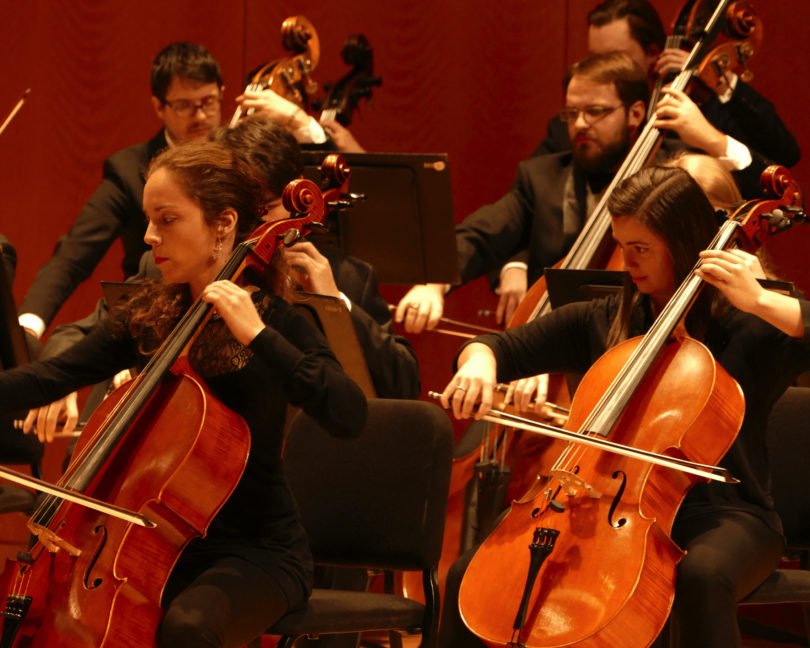 The University of Georgia Symphony Orchestra’s Sept. 6 concert will feature music by Ravel, Bernstein and Beethoven.

The Hugh Hodgson School of Music will open its 2018-2019 Thursday Scholarship Series with a concert by the University of Georgia Symphony Orchestra.

The UGASO is one of the school’s premier ensembles. Performing under the baton of Mark Cedel, the UGASO is dedicated to the study and performance of significant orchestral music.

“It’s a rather unique program in that there seems to be no relation among the selections. It is not what I would choose from a menu to make a perfect meal. But each work is an absolute masterwork in its own right,” Cedel said.

The evening’s program will pull musical selections from Maurice Ravel, Leonard Bernstein and Ludwig van Beethoven. The UGASO will perform Ravel’s Mother Goose Suite, Bernstein’s Symphonic Dances from West Side Story and Beethoven’s Symphony No. 5. Cedel said that “the difference, contrast, I think only sharpens each work’s individual genius.”

Ravel (1875-1937) originally wrote his Mother Goose Suite as a duet for piano, but this performance will include the entire orchestra. More than 96 students will take the stage for the performance of Symphonic Dances. Beethoven’s Symphony No. 5 will end the evening’s program.

“At the end of the evening, we will all be musically sated,” Cedel said.

The concert is scheduled for Sept. 6 at 7:30 p.m. in Hodgson Hall in the Performing Arts Center next door to the Hugh Hodgson School of Music.

Tickets for the event are $20 for adults and $6 for students and can be found online at ugapresents.org.

The UGA Hugh Hodgson School of Music sponsors more than 350 performances each year and continues the legacy started by its namesake. From 1941-1950, Hodgson directed the University of Georgia Little Symphony Orchestra, a forerunner of today’s UGASO. The Thursday Scholarship Series began in 1980 and continues the tradition of “Music Appreciation Programs” that Hodgson started. Proceeds from these concerts are the primary source of funds for School of Music general student scholarships.