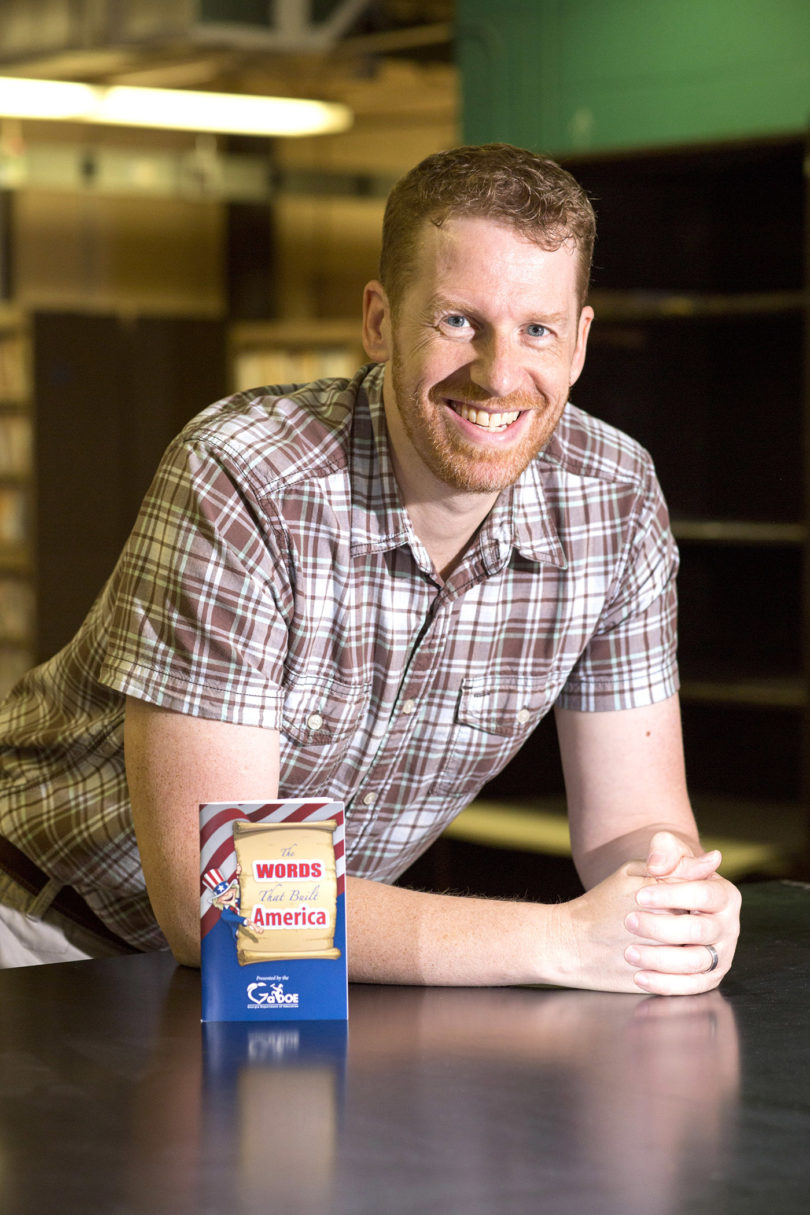 As a child, Sam Pittard had a rolled-up copy of the U.S. Constitution printed on faux parchment that he used to read. He even saved it to this day. Now, the senior graphic designer is helping Georgia children have their own copy of some of the most important documents in America’s history.

Pittard and others in Bulldog Print + Design, the newly combined unit that contains staff from what used to be University Printing and Central Duplicating, worked with the state Department of Education to create “The Words That Built America.” The booklet contains a copy of the Constitution and other historical documents and songs.

A copy of the booklet, which was designed by Pittard, was given out this fall to every one of the 150,000 fourth-graders in Georgia.

“I remember my old parchment printed copy of the Constitution and how much I loved having that,” Pittard said. “Now, hopefully some child somewhere in the state will feel that way after having this booklet.”

The booklet project, which was privately funded and used no taxpayer dollars, came about in May when the Department of Education partnered with Bulldog Print + Design.

“(The Department of Education) didn’t really have anything other than the core concept that they knew they wanted the Constitution in it,” Pittard said. “So I asked them about including things like the Declaration of Independence, “Star-Spangled Banner” and the Pledge of Allegiance, and they loved it.”

Pittard also wrote an introduction for each section and included some facts in the “Did You Know?” sections.

“I really wanted things to grab a fourth-grader’s eye and keep them engaged,” he said. “I really enjoyed working on this project. In fact, in doing a bit of the research, I learned a bit myself, and I actually read the Constitution for the first time since probably high school.”

Pittard is quick to point out that while he designed the booklet, about a dozen others were involved in the entire process.

“I’m proud of the whole group to be able to turn this out,” he said.

Max Harrell, manager of Bulldog Print + Design, said the staff had to pull “double duty” to make the project successful.

“It was a true team effort here; the staff did a wonderful job,” he said. “I think this would probably be the largest project this department has ever produced.”

Debi Huckaby, a senior marketing professional in Bulldog Print + Design, said the project helps show how UGA’s units can be “on the same team” with state departments.

“The project is a great illustration of a partnership between K-12 and higher ed in the state of Georgia,” she said. “We’re all here to enrich the lives of all students, and this kind of illustrates that.”

The efforts of everyone involved in the project were recognized at the state Capitol as Georgia’s School Superintendent Richard Woods presented the booklet to Gov. Nathan Deal. During the event an ROTC color guard presented the flags and a fourth-grade class sang “You’re a Grand Old Flag.”

“It was nice to get to the Capitol and get a sense that this project was something bigger than what we did,” Pittard said. “I’m proud to be a part of something that not only is showcasing the words that built our country, but I am excited that fourth-graders now have something so early in their lives that will reference those things.”