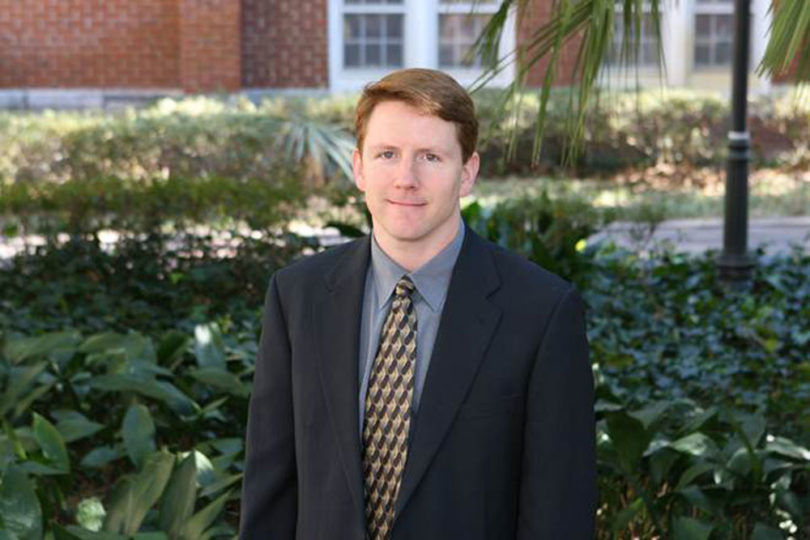 Athens, Ga. – Jason A. Colquitt is the first professor to be appointed to the William Harry Willson Distinguished Chair of Business at the University of Georgia.

Colquitt joined the management faculty in the Terry College of Business this fall from the University of Florida, where he was the McClatchy Professor of Management. Colquitt brings with him a prominent professional appointment as the editor in chief of the Academy of Management Journal, which is regarded as the top empirical journal in the field of management. At age 39, he is the youngest professional to be named editor of the journal, and he is in the second year of a three-year term of service.

“Since he completed his Ph.D. at Michigan State University 12 years ago, Dr. Colquitt has produced a record of research that is virtually unrivaled,” said Allen Amason, head of the Terry College’s management department. “The quality and quantity of his research is extraordinary, and his accomplishments in professional service and teaching only reinforce his reputation as a true leader in the field of management.”

His research interests include fairness, trust and team effectiveness within organizations and personality influences on performance. He has published more than 30 articles in top journals, including the Academy of Management Journal, Academy of Management Review and the Journal of Applied Psychology.

Colquitt has served on six editorial boards and been an ad hoc reviewer for 18 different research journals related to the field of organizational behavior. In 2006, he was also elected to a three-year term as representative-at-large for the Organizational Behavior Division of the Academy of Management, which included chairing the 2008 doctorial consortium and 2009 professional development workshop for organizational behavior scholars.

Among his honors, Colquitt was the 2005 recipient of the Society for Industrial and Organizational Psychology’s Distinguished Early Career Contributions Award and the 2006 Cummings Scholar Award for early- to mid-career achievement, sponsored by the Organizational Behavior Division of the Academy of Management.

Colquitt’s appointment, which was confirmed by the University System of Georgia Board of Regents this spring, became effective Aug. 12.

Dean Robert T. Sumichrast said the Terry College has turned a major corner in its bid to restore faculty positions during the past two years. In 2010, 15 professors joined the business school faculty, most of them new assistant professors. This year, the hiring focus was on senior faculty such as Colquitt, with well-established academic records.

The Willson Distinguished Chair of Business was established by Jane S. Willson of Albany, Ga., who gave $2.5 million to the Terry College of Business to endow a faculty chair in memory of her late husband, Harry Willson.

Jane and Harry Willson have been longtime supporters of education, international affairs and the arts. In 2001, they gave $1 million to the UGA Center for International Trade and Security to create an endowment that brings visiting scholars and international leaders to the university and provides international internship opportunities for students. In 2005, Jane Willson gave a $534,000 gift to the UGA Honors Program to provide travel grants for honors students to study abroad. They endowed the UGA Center for Humanities and Arts, which was renamed the Jane and Harry Willson Center for Humanities and Arts in 2005. The couple also endowed a professorship in the humanities, created a scholarship fund for undergraduates and supported the State Botanical Garden at UGA.

In recognition of her many contributions, Jane Willson was awarded an honorary degree from UGA in 2006. She has served as a trustee of the UGA Foundation and the UGA Research Foundation.

For more information about the management department in the Terry College of Business, see
http://www.terry.uga.edu/management/.