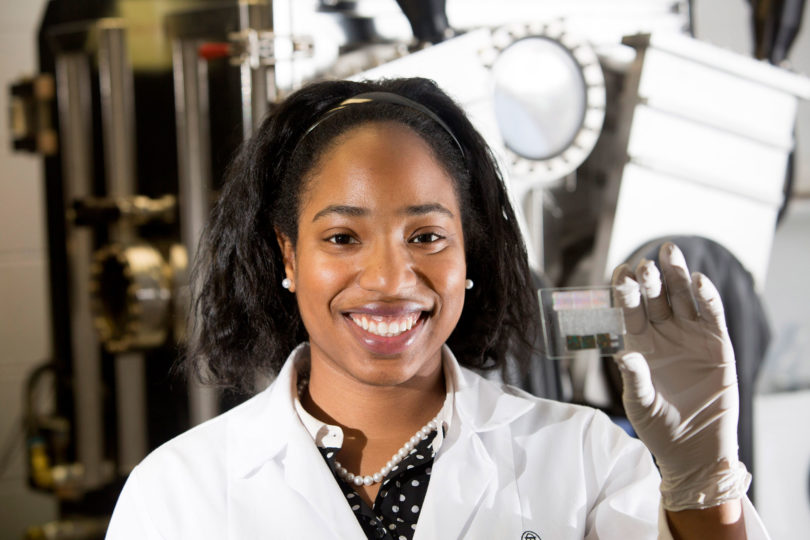 Whitney Ingram, who in 2016 became the first African-American woman to earn a Ph.D. in physics from UGA, is now a postdoctoral fellow at Sandia National Laboratories.

Whitney Ingram’s interest in science started as a girl. This month, she becomes the first African-American woman to earn a doctorate in physics at UGA—and she wants other young girls to do the same.

“I hope I can encourage girls to pursue the sciences no matter what might hold them down,” she said. “It’s fulfilling to go after something you really like. Go after what you love.”

In particular, Ingram wants to see the number of minorities and women working in sciences grow.

“There are not a lot of black women in physics,” she said. “There are recorded data that show there are less than 150 black females—living or deceased—in physics. I want people to know that because it’s a small number—pitifully small.”

As a child, Ingram read a story in National Geographic about the death of the sun. It scared her, but it also sparked an inquisitive nature that wanted to know more.

“I’ve always had a natural interest in science,” she said.

In high school, she took even more of an interest in science. Her physics teacher “made it come to life” by encouraging interactive experiences and taking time to answer questions.

“You look at the world differently when you apply physics,” she said. “I like the idea of breaking down what you see and really thinking about it.”

Ingram started at UGA as a freshman in 2007 and changed her major to physics early on, saying she “had a whim to stick with something I was passionate about.” After getting her bachelor’s degree in 2011, she started the doctoral program.

Ingram  works  in  nanotechnology and its applications in cloaking and sensors. For example, one project she worked on involved metamaterials that can be used as sensors for glucose and other molecules.

During her time at UGA, Ingram earned several scholarships and fellowships, attended eight conferences throughout her academic career, and authored or coauthored 14 studies for publication. Additionally, Ingram was chosen as part of a national competition to be one of 65 students to represent the U.S. delegation at the Annual Nobel Laureate Conference in Lindau, Germany, in 2015, where she had the opportunity to meet Nobel Laureates in physics, chemistry, physiology, peace and literature.

She’s looking at postdoctoral research positions after graduation but also hopes to find time to travel and pursue other hobbies in addition to finding ways to mentor those with an interest in science.

Not only has Ingram gained factual knowledge in her study of physics, but she’s also learned some life lessons like learning to collaborate and being flexible.

“Because you have to look at things differently, I think it’s good to never approach something from just one direction,” she said.