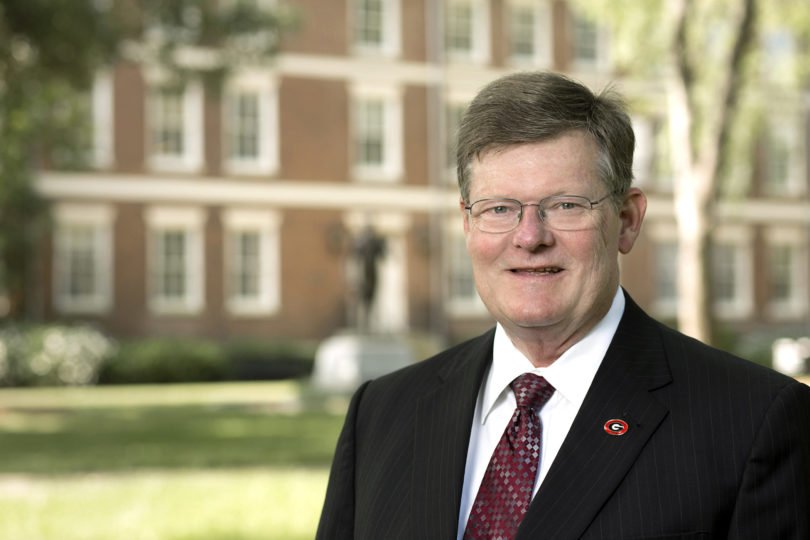 When he was a boy in LaGrange, Tom Jackson liked to hang out at the local radio station to watch the announcers work. That childhood fascination led him to a career in radio and television—where he learned how to tell compelling true stories—and eventually prepared him to become the institutional spokesperson for UGA.

For nearly 30 years now, Jackson has been telling UGA’s story of academic advancement. On July 31, he will step down as vice president for public affairs to accept a new position as heritage communications executive with the University System of Georgia.

“It has been a great privilege to be UGA spokesperson for 27 years,” Jackson said. “It’s a place that I love, it has a great story to tell, and the story has gotten better by quantum leaps.”

During times of crisis, it has been Jackson’s baritone voice, with its gentle Southern drawl, to answer reporters’ questions and provide calm in difficult times. But Jackson said his primary role was never that of crisis communicator.

Jackson started working at UGA in 1974 shortly after completing his bachelor’s degree at UGA in history. (He eventually would become a “triple Dawg,” earning his Master of Public Administration from the School of Public and International Affairs and his Ph.D. from the Institute of Higher Education.) But he left to work five years in radio in his hometown of LaGrange and eight years as an Atlanta TV reporter before returning to UGA in 1988.

Jackson said the transition from TV journalist to institutional spokesperson wasn’t a big change for him.

“I approach public relations the same way I approached news reporting,” Jackson said. “You tell the story, and you tell the truth.”

When the truth is disagreeable, Jackson said, you’ve got to fix the problem—not bend the truth.

“A lot of what you do in this job is making sure perception and reality are aligned-and that both are good,” he said.

In many ways, Jackson has been telling the story about a future UGA—one with national respect and prestige. That future is finally here, and Jackson is ready to begin telling a slightly different story—one that looks to the past rather than the future.

In his new job, Jackson will report to Chancellor Hank Huckaby’s office on an array of special projects dealing with heritage communications.

“It’s a new concept primarily in corporate communications where you build and enhance your brand on the history of your organization,” he said. “You take advantage of your history and the image that history conveys.”

Jackson will work on the next edition the book Historical Development of the University System of Georgia. The original was written by the late Cameron Fincher, Regents Professor of Higher Education and Psychology at UGA. Jackson will spearhead efforts for the state of Georgia’s observation of the centennial of World War I.

He will split time between Athens and Atlanta.

One job that won’t change this fall for Jackson will be his role as stadium public address announcer for the UGA Redcoat Marching Band, which he has done for 40 years.

As he looks back on his time at UGA, the most important two things to Jackson have been his professional relationships and the sense of purpose that’s come from working toward UGA’s mission.

“The University of Georgia is 230 years old and, 230 years from now, the university will still be here doing what it does,” Jackson said. “I hope in some small way I have helped lay a brick or two in that foundation. We all want to make a difference, and in a place like this you can. You can make a difference in people’s lives.”