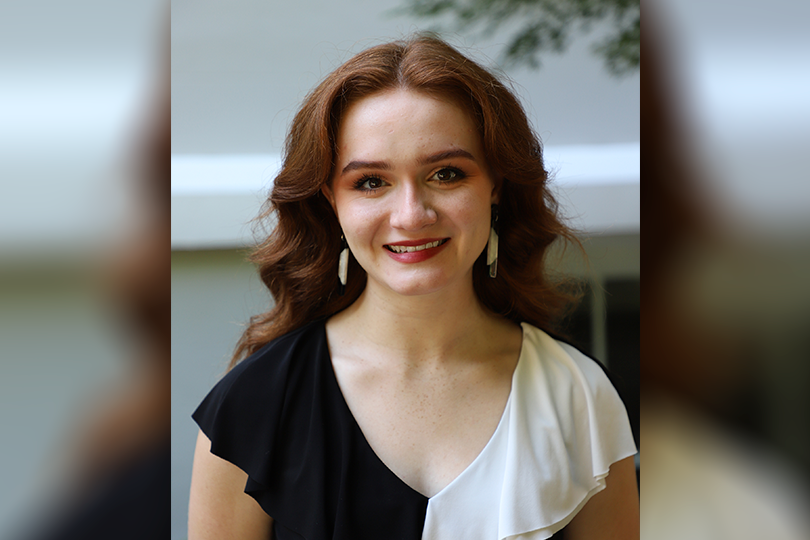 UGA one of 3 public universities to receive Rhodes Scholar, only institution in Georgia

University of Georgia student Natalie Navarrete was named a 2023 Rhodes Scholar this weekend, joining recipients from 64 countries around the world.

Navarrete’s achievement makes UGA one of only three public universities in the U.S., in addition to the nation’s service academies, to have a Rhodes recipient and the only institution in Georgia this year.

The Rhodes Scholarship is the oldest and most celebrated international fellowship award in the world. The 2023 Rhodes Scholars will begin their various courses of study as graduate students at the University of Oxford in October.

Navarrete is a current Morehead Honors College student and Foundation Fellow at UGA.

“The University of Georgia is incredibly proud of Natalie for this extraordinary achievement,” said President Jere W. Morehead. “Her success in being selected for one of the most competitive scholarships in the world is a testament to her tremendous talent and drive and to the world-class educational opportunities that UGA provides our students. I am confident she will continue to make important contributions to our society through her program at Oxford University and throughout her career.”

Navarrete, a Stamps Scholar from Boca Raton, Florida, is a senior in the Franklin College of Arts and Sciences and the School of Public and International Affairs, majoring in international affairs, Russian and Spanish with a minor in Latin American and Caribbean Studies.

“I join the entire University of Georgia family in congratulating Natalie on her distinction as a Rhodes Scholar,” said S. Jack Hu, senior vice president for academic affairs and provost. “She joins an impressive number of UGA students selected for this prestigious honor, which speaks to the excellence of our academic programs. I also am grateful to the faculty and staff of the Morehead Honors College and across campus who supported her and helped make her success possible.”

At the University of Oxford, Navarrete plans to pursue a master’s degree in Russian and East European studies and expand her research, which explores how criminal organizations in Central Asia evolved their smuggling strategies in the wake of the COVID-19 pandemic. She welcomes the challenge to move her Russian proficiency into a more academic realm, she said, after focusing on language skills meant for the professional world through the Russian Flagship Program at UGA.

Navarrete started this year in England, studying European politics and Russian and Spanish literature at the University of Oxford. She then traveled to Italy in March to study political philosophy through the Cortona Partnership Program. Over the summer, she participated in the UGA Intensive Summer Immersion in Russian Language and Area Studies in Hawaii. In September, she flew to Kazakhstan as a 2022 Boren Scholar to complete her Russian Flagship capstone year at Al-Farabi Kazakh National University.

Through the Russian Flagship Program, she has served as the internship and opportunity coordinator at UGA, the culture special interest group chair in Hawaii, a representative at the Hack the Language Flagship Through Game Design in Seattle, and a scholar at a symposium on environmental and social justice on Sapelo Island.

Through the Honors in Washington internship program, Navarrete interned for the U.S. Department of Energy’s Office of Nuclear Smuggling Detection and Deterrence and for the Office of Congressman Ted Deutch in summer 2021. She was a contributor to the Hill Happenings Blog.

Navarrete has been a legislative fellow for State Rep. Spencer Frye; a security leadership program scholar for the Center for International Trade and Security; and director of the Latin American team for GroundBreakers, which advances communities through a global network of local leaders. She also participated in UGA Undergraduate Mock Trial and the UGA Russian Club.