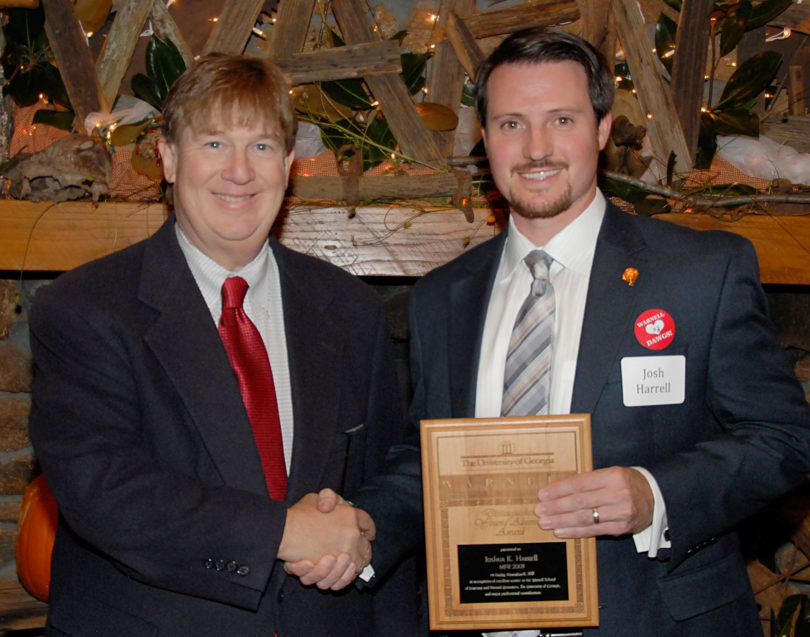 Athens, Ga. -The University of Georgia’s Warnell School of Forestry and Natural Resources recognized two alumni over Homecoming weekend, bestowing the Distinguished Alumnus and Distinguished Young Alumnus awards on men who have made significant contributions to the industry while strongly supporting their alma mater.

Tommy Sasser, who received his bachelor’s degree in forestry in 1970, was named the Warnell School’s Distinguished Alumnus, and Josh Harrell, who received his master’s degree in forestry in 2003, won the Distinguished Young Alumnus Award for 2013. Both men have made tremendous impacts on both the field of forestry and the Warnell School, said Dean Mike Clutter, and both have been very active members of Warnell’s alumni community.

“Josh has been a great alumnus of Warnell since graduating in 2003,” Clutter said. “He has been quite involved in our young alumni group as well as the Society of American Foresters at the state and regional level. Tommy has been a strong supporter of Warnell and UGA for many years having served on the UGA Alumni Association board and the Warnell external advisory board. His support and sage advice has helped our school in many ways.”

Sasser has more than four decades of experience in residential community and recreational development, making his mark in the industry with golf course construction and renovation. Currently with Recreational Community Consultants and Global Golf Advisors, Sasser has been instrumental in the planning, development and construction of more than 75 golf courses around the world, often working with Jack Nicklaus’ companies. Some of his master planned community developments include Amelia Island Plantation, Reynolds Plantation, Kiawah Island and Sea Pines Plantation, where he began his career. He’s also been an active UGA alumnus, serving on the UGA Alumni Association board of directors from 2005 to 2010, on the executive committee of the Alumni Association from 2006 to 2010, and the Warnell Alumni Steering Committee since 2009, most recently as president in 2012.

Sasser said he was in awe of being named the 2013 Distinguished Alumnus.

“During my senior year when I told (Warnell professor) Reid Parker that I was going to send a letter to the Sea Pines Company on Hilton Head, S.C., telling them they needed a forester, I had no idea where this would lead,” Sasser said. “My career started and has been on the ‘edge’ of what I would call forestry, but I am so grateful for Warnell. My ability and expertise in the golf and recreational community development industry was a direct result of the things taught and learned at Warnell. Understanding the land and the environment was the key to my success and I am forever grateful to the Warnell School of Forestry and Natural Resources.”

He said it is an honor to be named the 2013 Distinguished Young Alumnus.

“The applicable education I received at Warnell, coupled with the innumerable open doors, has proven invaluable throughout work and life,” Harrell said. “Recognition from peers and colleagues is humbling but also provides a charge to do more, to contribute more and to represent Warnell within our industry more.”