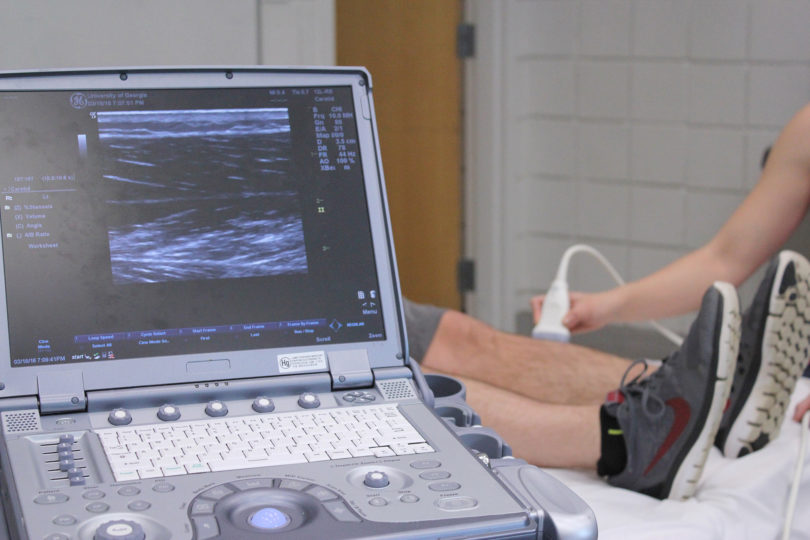 A University of Georgia graduate student measures the percent of fat in a calf muscle. According to a new study

Athens, Ga. – To explore the relationship between the percentage of fat in muscle and overall health, University of Georgia graduate student Hui-Ju Young began looking into ways to use ultrasound to measure muscle health. She had no idea her research would be based on cattle—and cuts of beef.

But as it turns out, a similar ultrasound technique used by ranchers to measure muscle mass in cows and bulls in an effort to produce offspring with similar qualities can also be used to estimate the amount of fat in human muscle. Except in Young’s research, the end result translates into a more accurate measurement of overall health, not the marbling in a cut of beef.

In a study recently published in the journal Muscle & Nerve, Young compared percent fat obtained with ultrasound to other health indicators, such as body mass index and fitness level, to determine if there is a relationship between the percent of muscle fat and a person’s overall health.

“Once I came out with that percent fat, I wanted to compare it to other health indicators,” said Young, who is now a postdoctoral fellow at the University of Alabama at Birmingham/Lakeshore Research Collaborative.

While it was a small-scale study, she said her findings show promise in using ultrasound technology as a valid tool to describe muscle health.

“There are studies that show intramuscular fat is linked with more severe health conditions, so the ultrasound measurement we came up with, if developed well enough to tease out the influence of connective tissue on the signal, can be used in clinical settings just like a weight scale.”

This means a 30-second scan, when entered onto a patient’s chart, can give doctors in a variety of settings a clearer picture of a person’s overall health. Plus, it is a valuable tool to examine the muscle composition of people with disabilities or chronic health conditions.

Traditionally, the most reliable measurement of overall muscle health has been via an MRI, CT scans or DXA (dual-energy X-ray absorptiometry), but if a patient is pregnant, has implanted metal rods or plates or is obese, this isn’t a viable option.

“This study is showing the utility of this measurement,” said Kevin McCully, a professor in the department of kinesiology in the UGA College of Education who advised Young on the study. “People who are less active have more fat across the body, yet not all muscles are the same. DXA is still the gold standard for measuring muscles, but you could take an ultrasound into the field, or people could stay in their wheelchair for the test. The portability of this is far superior.”

As a result, ultrasound technology, added Young, can be just as reliable while also being less invasive-and less expensive.

“I think the message tells us that we cannot judge people’s health superficially; we need to look into their body composition a little bit more in-depth,” she said.