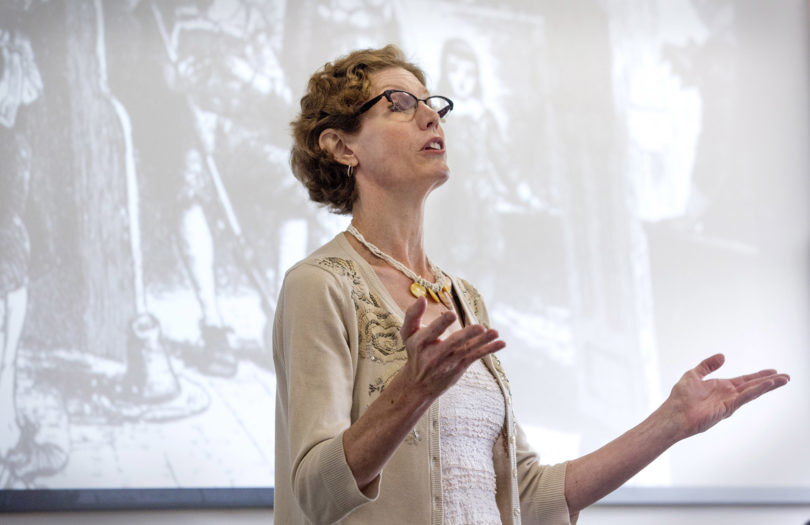 Faculty from universities and colleges across the U.S. mixed work and play at the Reacting to the Past Game Development Conference held July 15-18 at UGA.

In the role-playing game, students are assigned roles in a “crucible moment in history,” said Naomi Norman, an associate vice president for instruction at UGA.

In these student-run games, players use primary and secondary texts to debate ideas and persuade other players to win the game.

“They’re not just reading the material, they also have to actively engage with it,” said Melissa Harshman, an associate professor and printmaking chair at the Lamar School of Art. Harshman, played a game for the first time during the conference and is interested in using a game for her upcoming First-Year Odyssey class Printmaking: A Hands-On Experience.

There were two purposes to the conference. The first was to introduce Reacting to the Past to interested faculty.

On the first day of the conference, the so-called “Newbie Day,” faculty with no Reacting to the Past experience spent the day playing a game centered on the trial of Anne Hutchinson in 17th-century New England. Led by Chase Hagood, assistant CTL director and co-director of the Reacting to the Past Program at UGA, the game dealt with the nature of religious freedom, democracy and the rights of women.

Andy Owsiak, an assistant professor of international affairs in UGA’s School of Public and International Affairs, played a key role in the game as a New England governor in charge of banishing Hutchinson for espousing heretic religious beliefs.

Owsiak found himself arguing for a position counter to modern American beliefs about religious freedom.

“It’s hard to buy fully into something you don’t believe,” he said, “but it does allow you to try on different opinions and see things from a different point of view. That’s really what I encourage my students to do.”

The rest of the conference was dedicated to testing and developing games revolving around historical events that could be used for a variety of disciplines, including ones about Alan Turing’s development of the computer, the Guerrilla Girls art movement of the 1980s and the U.S. decision to use the atomic bomb on Japan.

“UGA is the perfect place to hold the game development conference because we have more (Reacting) game authors on this campus than almost anywhere in the U.S.,” Norman said. “It’s a great way to show off UGA and expose even more UGA faculty to the pedagogy.”