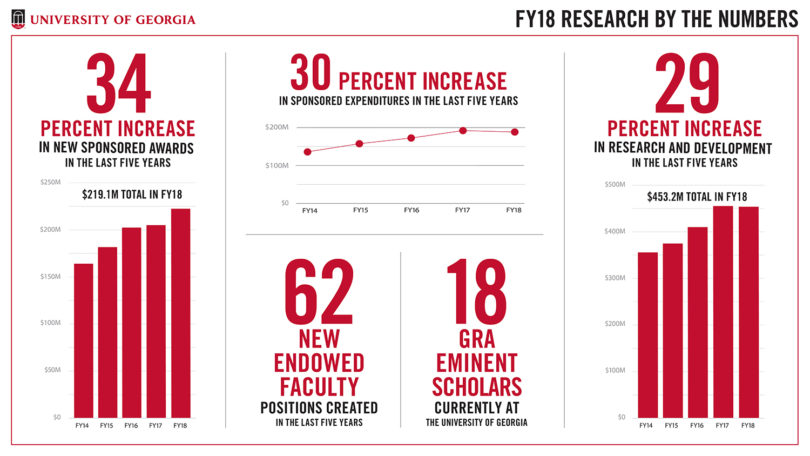 Published metrics demonstrate the University of Georgia has made remarkable progress with its goal to become one of America’s premier comprehensive research universities. This trend continued in the 2018 fiscal year.

UGA’s increase in R&D expenditures have resulted in a 12-point jump in the National Science Foundation’s Higher Education Research & Development rankings, from No. 66 in 2012 to No. 54 in 2016, the most recent rankings year. UGA now sits between the University of Chicago (No. 53) and Case Western Reserve University (No. 55).

Funding, however, is just one metric to track overall research activity, and from capital investments to the recruitment of world-renowned faculty, UGA’s research trend lines all point in the right direction.

“There is no doubt that the strategic investments we have made in faculty and infrastructure will continue paying dividends for many years to come—for UGA, of course, but also, and more importantly, for society at large,” said President Jere W. Morehead. “Like never before, this institution is focused on making a positive difference in the world.”

To help address those grand challenges, this fall UGA will add its 18th Georgia Research Alliance Eminent Scholar,
Gerald Hart, and its sixth such scholar since 2015. Add that to the 62 new endowed faculty positions created in the past five years (bringing UGA’s total to 289), and it’s clear that the university is going all-in to attract the top scholars and scientists of the 21st century.

“Faculty are the key,” said Vice President for Research David Lee. “Straight from the top, our leadership is committed to doing the kind of research that will make a real impact on the world around us, but we need the people to do it. That not only means the researchers themselves but also the students who support them and who, in turn, are training to become the next generation of scientific and creative leaders and innovators.”

Another critical factor is infrastructure investment. When the new, $65 million STEM building breaks ground sometime during 2018-19, it will represent the culmination of well over $100 million in capital expenditures dedicated to research in just the past five years (with at least that much planned for the next five years). That investment includes new construction and renovations to support, among other projects:

“By recruiting and retaining outstanding faculty members and giving them the tools they need to discover and innovate, the University of Georgia affirms its commitment to research that results in healthier people, a more secure future and stronger communities,” said Interim Senior Vice President for Academic Affairs and Provost Libby V. Morris. “We’ve made tremendous strides and have even higher aspirations for the future.”