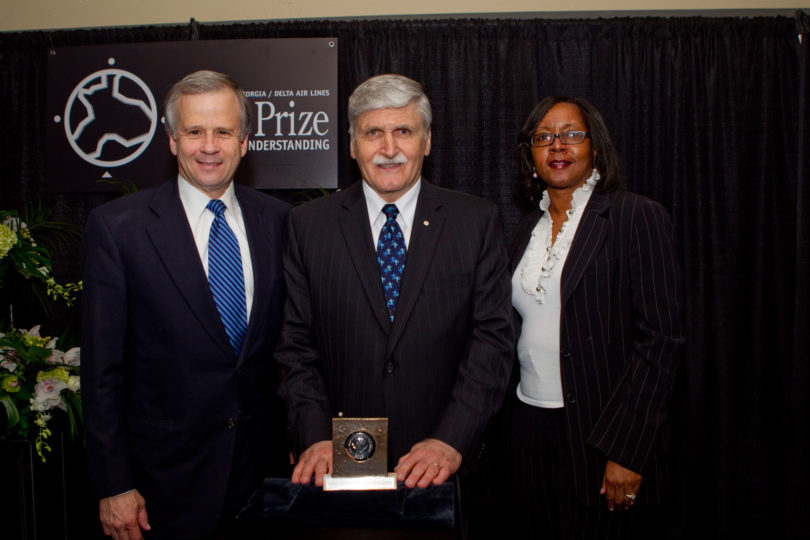 Athens, Ga. – Delta Air Lines and the University of Georgia presented the 2012 Delta Prize for Global Understanding to Roméo Dallaire, a Canadian senator and retired Canadian Army lieutenant-general, March 16. Dallaire was honored for his leadership, passion and diplomacy in promoting human rights.

“The Delta Prize board has once again selected a true hero in the fight for human rights,” said UGA President Michael F. Adams. “Sen. Dallaire’s work to keep children from being forced into military service is inspiring. He joins an esteemed group of Delta Prize recipients whose collective work has made the world a better place.”

Established in 1997 with an $890,000 endowment grant from the Delta Air Lines Foundation and administered by UGA, the prize consists of a sculpture, a $10,000 cash award and a $50,000 travel allowance from Delta for a nonprofit organization of the recipient’s choice.

“One does not expect that the work being done on humanitarian matters would gain the attention of such a significant body that has chosen me for this award,” Dallaire said. “The opportunity of addressing the assembly body as well as the benefits that the prize will provide to my efforts on the eradication of child soldiers are force multipliers in our fight to end the use of children as weapons of war. We are still trying to absorb the generous and significant recognition that has been afforded us.”

“My main thrust right now is advancing the concept of stopping the recruitment of children as weapons of war by conducting in-the-field research in central Africa where their use and recruitment has not waned even though we have had the optional protocol on child rights in existence since the year 2000,” Dallaire said.

“There are injustices in the world that garner significant attention at the policy and public opinion level, although often it is too punctual to be fully effective,” he added. “The engagement in attempting to attrite the arming of children due to the proliferation of small arms as well as the forcible recruitment and indoctrination of children below the age of 15 to use these weapons in civil wars around the world are overt demonstrations of our inability to recognize that all humans are equal and that those children are just as human as ours.”

As an advocate for human rights, Dallaire focuses on war-affected children, women, military veterans and Canadian First Nations, a collective term that describes various Aboriginal peoples of Canada who are neither Inuit or Métis.

Since his retirement from the military, Dallaire has also worked to bring an understanding of post-traumatic stress disorder to the general public.

Dallaire was appointed force commander of the United Nations Assistance Mission in Rwanda prior to and during the 1994 genocide, which he details in Shake Hands with the Devil: The Failure of Humanity in Rwanda. In 1998, he was named assistant deputy minister of human resources in the Canadian Department of National Defence.

Besides being a visiting lecturer and receiving honorary doctorates from several Canadian and American universities, he also has been named a fellow of Ryerson University and an honorary fellow of the Royal College of Physicians and Surgeons of Canada. He was named an Officer of the Order of Canada in 2002 and Grand Officer of the National Order of Quebec in 2005. And he received the Aegis Award for Genocide Prevention from the Aegis Trust in the United Kingdom.

“Delta believes in supporting the communities where we live and work to create positive local and global change,” said Tad Hutcheson, the Delta Air Lines vice president of community and public affairs. “The Delta Prize for Global Understanding honors those who continue to have influence on the common good right here in Georgia through our partnership with UGA.”

For more information on the Delta Prize, see http://uga.edu/news/deltaprize.