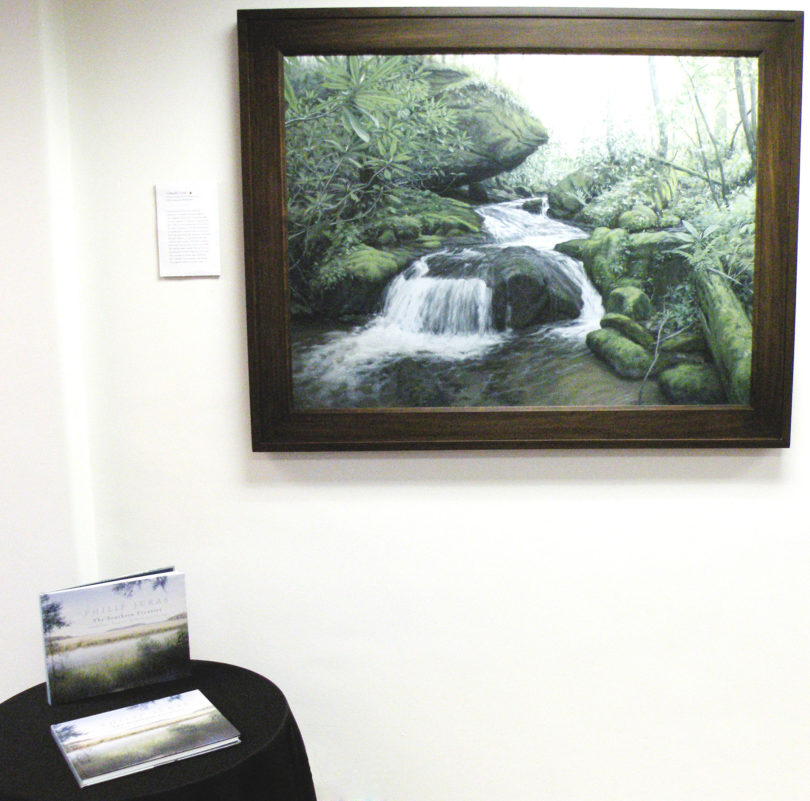 Artist Philip Juras has three of his landscape paintings on display at the UGA Press Offices. Photo by Jackie Baxter Roberts.

Athens, Ga. – The University of Georgia Press is celebrating its 75th anniversary with events scheduled throughout the year, including appearances at conferences and book festivals, a display at the UGA main library and the Dirty Book Sale in the fall.

“The University of Georgia Press reaches its 75th year having established an international reputation for excellence in scholarly and regional publishing,” said P. Toby Graham, UGA’s deputy university librarian and director of the Digital Library of Georgia. “We are fortunate to have such a vibrant, creative, and distinguished press at UGA.”

In honor of the anniversary, artist Philip Juras loaned three of his landscape paintings to the press. The paintings, “Connelly Creek,” “Little Tennessee River Valley” and “Fork Mountain Trail,” will be exhibited in the lobby of the press’s offices in UGA’s main library through June. The press currently distributes his book, “Philip Juras: The Southern Frontier: Landscapes Inspired by Bartram’s Travels,” which was published by the Telfair Museum of Art in 2011. Juras lives in Athens and received a bachelor’s in fine arts and a master’s degree in landscape architecture UGA.

During the yearlong celebration, the press will be participating in a variety of events, including the Savannah Book Festival Feb. 14-17, the Decatur Book Festival Aug. 31-Sept. 1, the Georgia Literary Festival Nov. 9-10 and the Spotlight on the Arts at UGA festival in the fall.

At the Association of Writers and Writing Programs Conference March 9, a reception will jointly celebrate the press’ 75th anniversary and the 30th anniversary of the Flannery O’Connor Award for Short Fiction. The press publishes the winning collections each year.

A display of all of the Flannery O’Connor Award winners will be available for viewing on the third floor of the main library on April 18. The press will hold an open house that same day.

The press will also have a display in the main library’s lobby for the month of April.

In the fall, the press will hold a Dirty Book Sale on campus. Slightly damaged books will be for sale at significantly reduced prices.

More details and other events will be announced as they become finalized.

Founded in 1938, the UGA Press is the largest book publisher in Georgia. With a full-time staff of 24 publishing professionals, the press currently publishes 80-85 new books a year and has more than 1,500 titles in print. It has well-established lists in Atlantic World and American history, American literature, African-American studies, Southern studies and environmental studies, as well as a growing presence in the fields of food studies, geography, urban studies, international affairs and security studies.

The primary mission of the press is to support and enhance the University of Georgia’s place as a major research institution by publishing outstanding works of scholarship and literature by scholars and writers throughout the world. The press also has a long history of publishing books about the state and region for general readers.