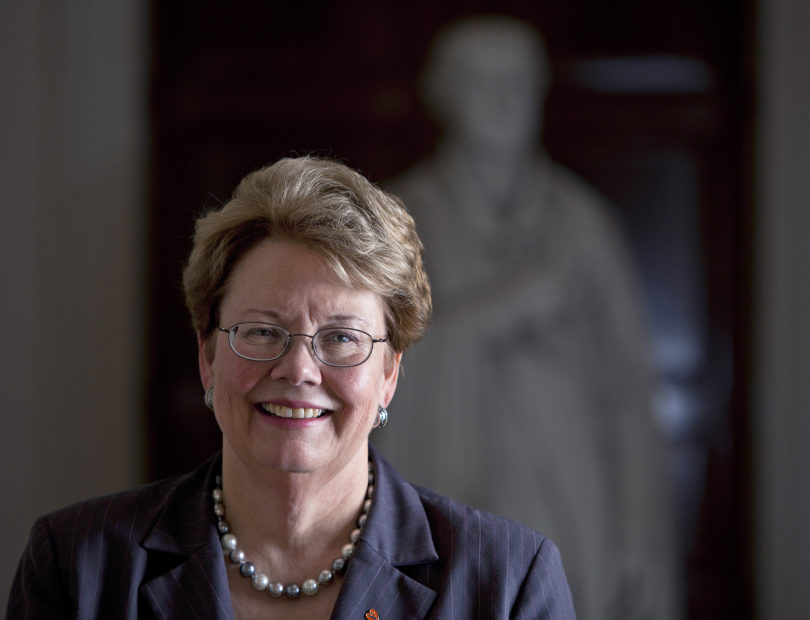 Athens, Ga. – Teresa Sullivan, president of the University of Virginia, will give the 25th Annual Louise McBee Lecture Dec. 6 at 11 a.m. in the University of Georgia Chapel. The event is free and open to the public.

Sullivan was unanimously elected eighth president of the University of Virginia effective Aug. 1, 2010. Sullivan resigned from the university under pressure on June 10, 2012, and was reinstated a few weeks later after an outpouring of support from faculty, students and alumni.

“Dr. Sullivan is an ideal choice to address the university community on this 25th anniversary of the Louise McBee Lecture,” said Jim Hearn, professor and interim director of the Institute of Higher Education. “She is a distinguished scholar and leader and an exemplar of courage and grace under pressure-much like the woman this event honors.”

Prior to her appointment at UVA, Sullivan was the provost and executive vice president for academic affairs at the University of Michigan. She was also professor of sociology in the College of Literature, Science and the Arts.

From 2002 until May 2006, Sullivan was executive vice chancellor for academic affairs for the University of Texas System. There, she served as chief academic officer for the nine academic campuses within the University of Texas System. Her responsibilities included developing tuition-setting procedures, initiating and supporting educational and research collaborations among the various campuses, and developing external collaborations.

Sullivan’s research focuses on labor force demography, with particular emphasis on economic marginality and consumer debt. The author or co-author of six books and more than 50 scholarly articles, her most recent work explores the question of who files for bankruptcy and why. Sullivan has served as chair of the U.S. Census Advisory Committee. She is past secretary of the American Sociological Association and a fellow of the American Association for the Advancement of Science.

A graduate of James Madison College at Michigan State University, Sullivan received her doctoral degree in sociology from the University of Chicago.

Founded in 1989, the McBee Lecture is one of the few in the U.S. focused solely on higher education. The annual event, sponsored by the Institute of Higher Education, honors Louise McBee, a former UGA vice president for academic affairs and a former state representative from Athens. During McBee’s 25-year tenure at UGA, she served in a number of positions, including dean of women, dean of students and acting vice president for academic affairs. Following her retirement in 1988, the Board of Regents of the University System of Georgia named her vice president emerita for academic affairs. McBee was elected to the Georgia House of Representatives in 1991 and served six terms before stepping down in 2004. In her last term, she was chair of the House Higher Education Committee. For more information on the McBee Lecture, see http://ihe.uga.edu/events/louise-mcbee-lectures.