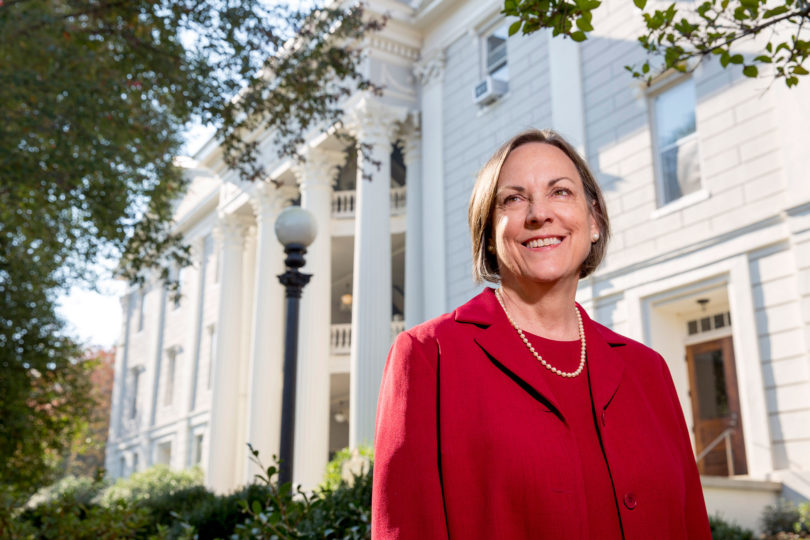 Registrar Jan Hathcote will retire Jan. 4 after 26 years with the University of Georgia.

Jan Hathcote will walk through the front door of the Holmes-Hunter Academic Building for the last time as registrar Jan. 4.

After 26 years at UGA, she will assume a new title: retiree. Hathcote leaves a legacy of leadership that has transitioned into the digital age an office that serves 36,000 UGA undergraduate and graduate students annually in course registration and degree planning.

Hathcote came to UGA in 1990 as an assistant professor of fashion merchandising and went on to become associate dean for academic affairs and research for 14 years in the College of Family and Consumer Sciences. She also served as interim dean from 2006-2007 before becoming a full professor in 2011. She earned her bachelor’s degree in home economics education from UGA in 1974 and received a doctorate in human ecology from the University of Tennessee in 1989.

“One of the biggest surprises coming into this position is the fact that this office runs opposite of the academic calendar. Most of our work is done in the summer and through fall registration, and then again when grades are due,” Hathcote said. “That was quite an adjustment and not something I realized as a faculty member at UGA.”

When Hathcote took over the reins of the Office of the Registrar in 2011, a large task loomed before her. She was put on the ConnectUGA project advisory and implementation teams with other campus offices to launch Banner and the new Athena student information system. At that time, students were still registering for classes through the 30-year-old OASIS registration system and using older legacy systems that pulled data from different areas.

“Part of the challenge in this process was creating a culture change and shifting our staff from working in silos to working with each other. And this extended beyond our office and getting our staff to collaborate with staff in other offices, like Curriculum Systems, Student Financial Aid, Admissions, the Bursar’s Office and EITS,” said Hathcote.

Hathcote’s office, along with support from EITS, also has just launched DegreeWorks Plans, an add-on to Banner that pulls course information from Athena and allows students and advisors to map out degree plans. Also launched in 2014 is a new e-transcript system in which current and former students may request their transcripts online, cutting down the delivery time to days rather than weeks. She also guided her staff in two major initiatives to reduce class sizes and move the campus toward a centralized class reservation system.

Other technological changes her office implemented include electronic certified enrollment verification, imaging 65,000-70,000 paper records from the 1970s to the present into the central database, moving more than 480,000 student records from the legacy (IMS) system into Banner and creating an electronic graduation application through Athena.

Hathcote also has brought other skills to the table that have had just as much impact on the way the Office of the Registrar conducts business. She remodeled the office into a more customer-friendly environment, creating open space and walk-up desks and eliminating the tall counter that created barriers between students and staff. She also had a digital information screen mounted in the hallway to keep students up-to-date on schedules and important deadlines. Additionally, she resurrected an advisory council to guide the office in decision-making and disseminating information to other offices across campus as well as worked to develop strong relationships with the registrar staff at Georgia Tech, Georgia State and Kennesaw State universities for collaboration in best practices.

As registrar, it’s interesting to note that Hathcote’s signature is imprinted on over 50,000 diplomas and 300,000 transcripts. She has been responsible for coordinating the planning of the academic calendar; certifying veteran educational benefits and student athletes for NCAA eligibility; serving as secretary of the University Council and organizing elections, facilitation and minutes; managing residency status for currently enrolled students; and sitting on the Commencement Steering Committee, which coordinates two Commencement ceremonies and a printed program each year.

“I feel really great about how far this office has come in such a short period of time,” said Hathcote. “Whoever is chosen as registrar after me will have a fully supportive and well-trained staff that can handle just about any challenge or change.”

Hathcote plans to take advantage of her retirement and spend more time with her husband and family, including her two grandchildren, and go to their lake house more often.

She will continue to support UGA through two scholarship funds she established several years ago. The Jan M. Hathcote Social Science Academic Support Fund helps graduate students in the social sciences on research-related expenses, including paying for research data and travel to research locations. The Jan M. Hathcote Scholarship supports undergraduate students in fashion merchandising or in the social sciences.