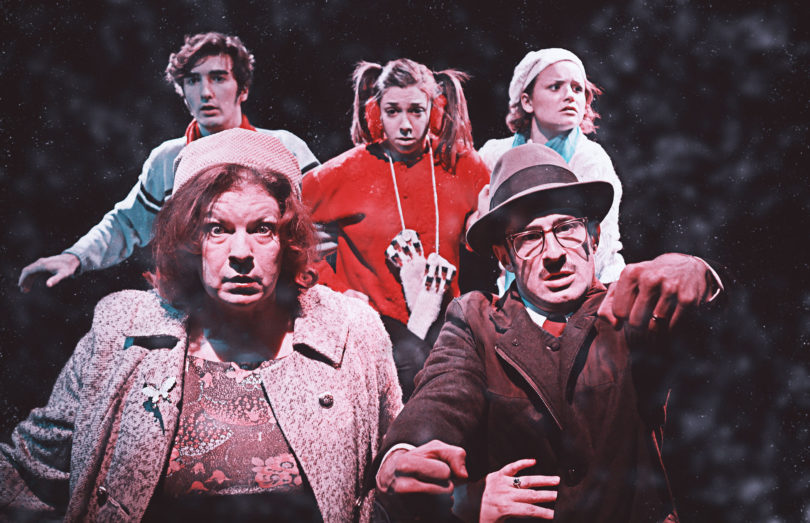 University Theatre presents The Long Christmas Ride Home by Paula Vogel in the Seney-Stovall Chapel Jan. 31-Feb. 5 at 8 p.m. and Feb. 5 at 2:30 p.m.

Tickets are $12, $7 for students, and can be purchased at drama.uga.edu/box-office, by phone at 706-542-4400 or in person at the Performing Arts Center or Tate Center box office.

The Long Christmas Ride Home, directed by T. Anthony Marotta, an assistant professor in the theatre and film studies department, takes the audience on an emotionally rocky, and highly theatrical, holiday road trip with a dysfunctional family.

Inspired by Vogel’s brother, who passed away in 1988 from AIDS, the play explores the complicated dynamics of a family plagued by loss and broken relationships. Audiences often recognize themselves in the way the children poke and irritate each other or the holiday bickering between generations.

“It creates an experience that’s only possible in theater,” Marotta said. “Not many plays have masks and puppets written in. Usually it’s just goofy puppet plays for kids or academic theater for actors using masks. Good theater pays attention to using objects in a meaningful way and invites the audience to use their imaginations.”

The parents, played by MFA acting candidates Mark McManus and Ami Salee, are near the breaking point of their marriage. The oldest child, Rebecca (theatre major Taylor Bahin) teeters on the edge of adulthood. Stephen (theatre and English major Brian Chenard) is an effeminate boy who cannot understand why his father does not love him. Claire (theatre and advertising major Melanie Sheahan), the lone recipient within the family of their father’s coveted affection, wrestles with brazen desires and self-doubt.

Lukas Takeru Woodyard, the production’s ­dramaturg, describes the play as “a strange and new experience.”

Vogel takes inspiration from playwright Thornton Wilder, and The Long Christmas Ride Home follows this season’s production of Wilder’s The Skin of Our Teeth.

“Paula Vogel, who’s won both the Pulitzer Prize and Obie Award, is one of America’s most treasured living playwrights,” said David Saltz, head of the theatre and film studies department. “We’re excited to explore this formally ingenious and psychologically razor-sharp play.”